The basic foundational unit of a neural network is the neuron, which is conceptually quite simple.

Schematic for a neuron in a neural net

The function of a sigmoidal neuron

Regardless of the choice of the activation function, the value outputted by the neuron is transmitted to other neurons as its input. A neural network comes about when we start hooking up neurons to each other, to the input data, and to the “outlets,” which correspond to the network’s answer to the learning problem. To make this structure easier to visualize, a simple example of a neural net is included below. We let w(k){i,j} be the weight of the link connecting the ith neuron in the kth layer with the jth neuron in the (k+1)st layer: 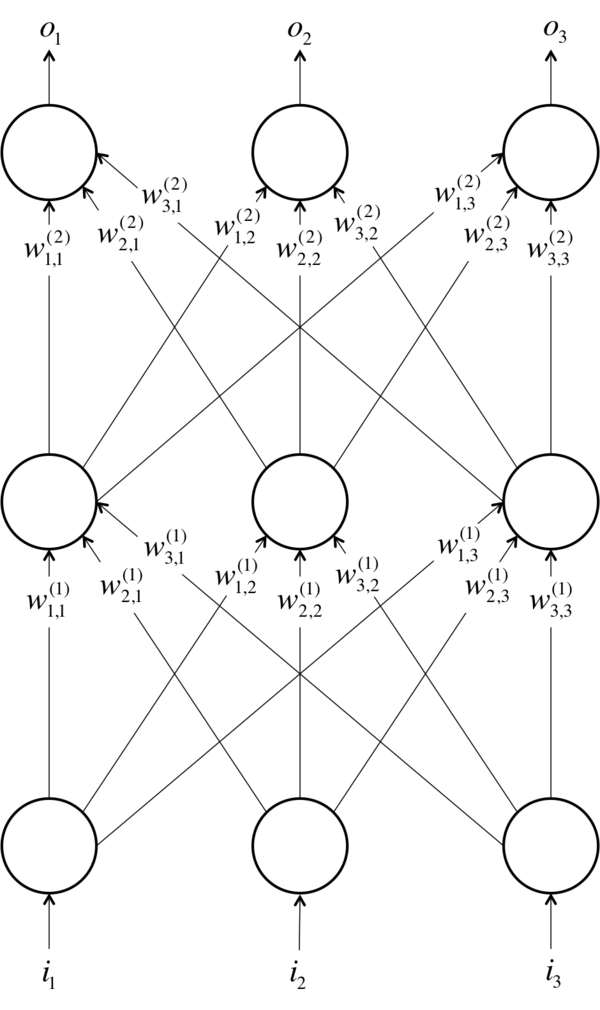 Similar to how neurons are generally organized in layers in the human brain, neurons in neural nets are often organized in layers as well - neurons on the bottom layer receive signals from the inputs, neurons in the top layers have their outlets connected to the “answer,” and usually there are no connections between neurons in the same layer (although this is an optional restriction, more complex connectivities are allowed in general). We also note that in this example, there are no connections that lead from a neuron in a higher layer to a neuron in a lower layer (i.e., no directed cycles). These neural networks are called feed-forward neural networks as opposed to their counterparts, which are called recurrent neural networks. For the sake of simplicity, we focus only on feed-forward networks throughout this discussion.

Further, here are some important notes to keep in mind:

Also, note that it is not required that a neuron has its outlet connected to the inputs of every neuron in the next layer. Different architectures of neural networks are obtained by selecting which neurons to connect to which other neurons in the next layer.

The following is the pseudocode for doing the forward-pass, i.e. calculating the output of the neural network given the input.

There is no closed form solution for finding the optimal values of the weights (or parameters) of a neural network. To train a neural network, we use the iterative gradient descent method. That is, we start with random initialization of the weights. And then repeatedly make predictions on some subset of the data (forward-pass), calculate the corresponding cost function C, and update each weight w by an amount proportional to dC/dw, i.e. the derivative of the cost functions w.r.t. the weight. The proportionality constant is known as the learning rate.

If the neural network consists of only fully-connected layers, then the calculations we saw can be written using matrices. This is common practice because it leads to higher computational efficiency, allowing the use of vectorized mathematical operations (a feature most computing hardware supports). In this case, the forward-pass pseudocode would look as follows: