As UX Designers, we are constantly trying to introduce new behaviors into our users’ lives — the Fogg Behavior Model shows that three elements must converge at the same moment for a behavior to occur: Motivation, Ability, and Trigger. When a behavior does not occur, at least one of those three elements is missing. As you can see below, motivation and ability can be traded for each other to some extent: 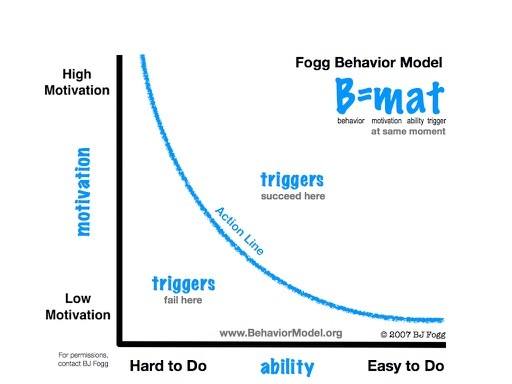 The model further goes on to break down each of the three elements into sub-elements to make it easier to reason about them:

The third element of the Fogg Behavior Model is Triggers. Without a Trigger, the target behavior will not happen. Sometimes a Trigger can be external, like an alarm sounding. Other times, the Trigger can come from our daily routine: Walking through the kitchen may trigger us to open the fridge. Examples of triggers in web products include push notifications, emails, etc. for external triggers, and an inherent desire to do something as an internal trigger (say when I’m about to eat fancy food, I want to instagram it!)

The model is a simple way to think about behavior design, and when you’re thinking about why your users are not doing what you want to do, it helps to think using this as a reference model: is it because they lack a motivation? Is it because the task is too complicated? Or is it because they’re just missing the trigger to remind themselves to go through the task.