This post is an intuitive introduction to computational graphs and backpropagation - both important and core concepts in deep learning for training neural networks.

Deep learning frameworks such as Tensorflow and Torch perform backpropagation and gradient descent automatically. So, why do we need to understand it?

The answer is, because although the calculations are abstracted out by libraries, gradient descent on neural networks is susceptible to various issues such as vanishing gradients, dead neurons, etc. When we are trying to train a neural network and we face these problems, we will not be able to resolve it unless we understand whats going on behind the scenes.

Computational Graph, What is it?

A computational graph is a directed graph where the nodes correspond to mathematical operations. It is a way of expressing and evaluating a mathematical expression.

For example, here is a simple mathematical equation.

We can draw a computational graph of the above equation as follows.

The above computational graph has an addition node (node with ”+” sign) with two input variables x and y and one output q.

Let’s take another example, slightly more complex. We have the following equation.

Which is represented by the following computational graph.

Forward pass is the procedure for evaluating the value of the mathematical expression represented by computational graphs. Doing forward pass means we are passing the value from variables in forward direction (toward node’s output).

By giving those values to the inputs we could do forward pass and get the following values for the outputs on each node.

In the backward pass, our goal is to calculate the gradients for each input with respect to the final output. These gradients are required for training the neural network using gradient descent.

For our running example, we desire the following gradients.

Next, we will do the backward pass through the ”” operation, i.e. we’ll calculate the gradients at q and z. Since _f = qz_, we know that

We already know the values of z and q from the forward pass. Hence, we get

So the graph now looks as follows: 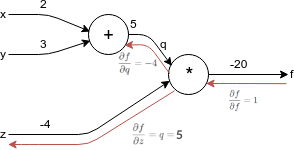 Now comes the interesting part. We want to calculate the gradients at x and y, i.e.

but we want to do this efficiently (although x and f are only two hops away in this graph, imagine them being really far from each other). To calculate these values efficiently, we’ll use the chain rule of differentiation. From chain rule, we have

But we already know the df/dq = -4 (which is the difficult term to calculate here if the graph is large). dq/dx and dq/dy are easy since q directly depends on x and y. We have,

And for the input y.

And our final graph. 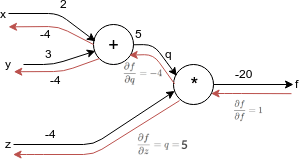 The main reason for doing this backwards is that when we had to calculate the gradient at x, we only used already computed values, and dq/dx (derivative of node output with respect to the same node’s input). We used local information to compute a global value.

Note that in the computational graph, the weights are nodes too.

The computational graph of a naive neural network plus cost function looks as follows:

Putting it all together

We have a neural network, and its corresponding computational graph G. It takes as input x and gives output c, which represents the error or the cost.

Steps for training a neural network are as follows: