Correlation analysis can help us understand whether, and how strongly, a pair of variables are related.

This tutorial will help you learn the different techniques and approaches used to understand correlations that exist between features in any dataset.

Correlation coefficient ranges between a value of -1 to 1.

The graphs below show different pairs of variables with different correlation coefficient $\rho$: 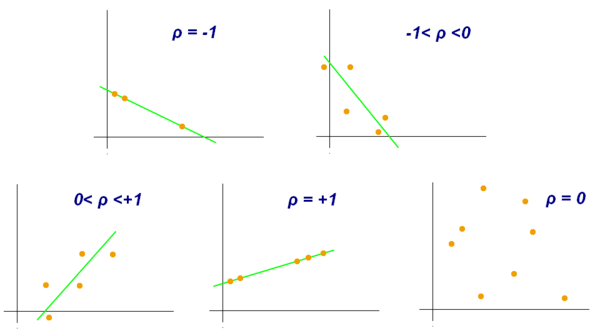 The magnitude signifies the strength of relationship between the variables.

The sign (positive / negative) signifies the direction of relationship:

The two most common types of correlation coefficient are Pearson’s and Spearman’s.

Spearman’s rank correlation coefficient assesses monotonic relationships, irrespective of whether it is linear or not. That is to say, it is only interested in knowing that an increase in one variable causes an increase in another variable.

Let us take an example to understand the difference: 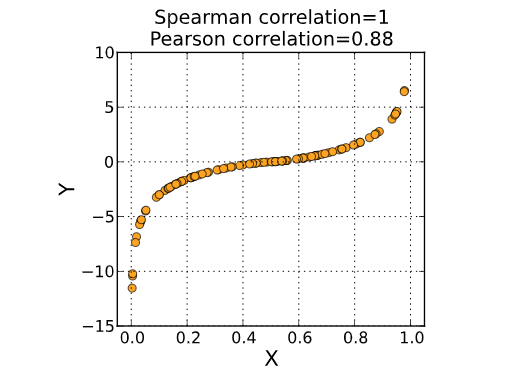 Before we proceed further, we should clarify that although correlation shows relationships between variables and it helps in predictive analysis, it does not imply causation.

For example: The sale of Sunglasses and the sale of ice-cream are highly correlated. But an increase in ice-cream sales does not cause an increase in the sales of sunglasses, or vice-versa. In this case, they are correlated because they both depend on a third independent variable, which is how hot / sunny it is.

Although correlation coefficients give us an idea about the strength of the relationship between two variables, it is not possible for a single number to give us the full picture.

Since correlation coefficients can only give us limited information, visualisation can be of great aid in understanding the relationship between variables.

For example, the following graphs show the famous example Anscombe’s Quartet. It consists of four data sets, where the correlation coefficient is exactly the same, even though the data sets are very different from one another. 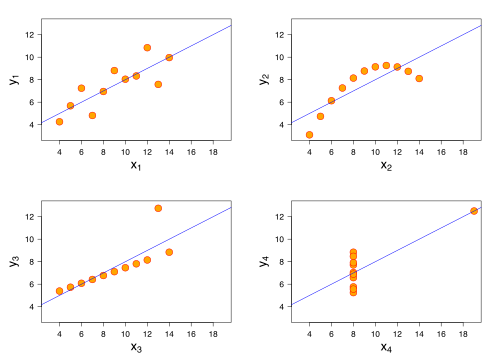 For the rest of this tutorial (and the next tutorial as well), we will be see how to use visualization to understand the relation between two variables. To do this, we will we using the seaborn Python library and a couple of datasets.

We will be using the standard data science libraries — NumPy, Pandas, Matplotlib and Seaborn. So let’s start by importing them.

We’ve also asked pandas to increase the display width to 200 characters, and the maximum number of columns it should display to 20. This will make sure we can view our data properly.

We will be using the wine dataset and the tips dataset available on CommonLounge. We’ll load these datasets using the load_commonlounge_dataset() function, which returns a DataFrame.

Below, we’ve included a brief description of these two datasets.

This dataset is the result of a chemical analysis of wines grown (in the same region) in Italy.

The following are the variables in the dataset:

All other attributes are continuous numerical variables:

Let’s take a glimpse of the first few instances in the dataset using the head() function:

The data is taken from UCI Machine Learning Repository.

In the tips dataset contains information about the tips collected at a restaurant.

Here’s a description of the attributes:

This data is taken from Seaborn’s data repository.

Again, let’s take a glimpse of the first few instances in the dataset:

We will also use a third dataset, which we will only use for the exercises in this article. For now, we will load it and keep it aside.

Correlation analysis between a pair of Numerical variables

To explore correlation between two numerical variables, we will use two different kinds of plots: Scatter plots and Hexbin plots.

The tips dataset has a output variable which is continuous and some input variables which are also continuous. Let us plot them against each other and see if there is a trend.

We’ll start by plotting the tips variable against the `totalbill`_ variable.

To do so, we will use the jointplot() function from the seaborn library.

Here’s the syntax for the function:

Let’s give it a try:

As you can see, apart from plotting a scatter plot, the jointplot() function also plots the univariate distribution of x and y on the x and y axis.

These insights would have been hard to extract without visualisation.

As we saw in the graph above, the data-points in a scatter plot may overlap each other. This makes it harder to gauge the density of points in certain regions of the plot.

Let us use the same variables to plot a hexbin plot. We will use the same jointplot() function, but this time we will pass the kind parameter the value "hex". Here’s the syntax:

Note : The default argument for kind is "scatter". That is why it plots a scatter plot when no argument is passed to this parameter.

Hexbin plots are equivalent of bar graphs, but for a pair of variables. It creates hexagonal bins, dividing the data in both x and y axis into intervals. The darker the colour of the hexagon, the higher is the frequency in that interval.

So far for plotting, we have been using the following syntax:

Since we have a dataframe with all the data, this usually translates to:

When the x and y data are stored in the same DataFrame, seaborn also supports another syntax, which is:

These two syntax are equivalent, and all the seaborn functions discussed in this tutorial support both.

Correlation analysis between a Numerical and a Categorical variable

To explore correlation between a categorical and a numerical variable, we will use Strip plots, Swarm plots, Boxplots and Violin Plots. All the these plots will be drawn using functions from the seaborn library.

For this section, we will use both the datasets.

In the wine dataset, the output variable Wine is categorical, while all the input features are numerical.

In the tips dataset, the output variable tips is numerical, while the input variables are categorical.

Let us explore these cases visually and see if we can draw some inferences.

Strip plots are similar to scatter plots, but for the situation when one of the variables is categorical.

We will be using the stripplot() function. The syntax is:

Although we can see the data points, they are not very clear because so many of them overlap. This makes it difficult to gauge the density of the data points.

Solution: We can fix this by using the parameter called jitter.

jitter can take in float value for the amount of jitter, or take a boolean value where True or 1 has a default value of jitter associated with it, and False or 0 means no jitter.

The default value of jitter is True.

Let’s re-draw the plot with the added parameter:

The plot looks much better now.

Let us now plot the output variable Wine against the input variable Alcohol from wine_data.

We can see a big problem in the graph.

Since we plotted the categorical variable on the y-axis and our categorical labels are integers, the stripplot() function is not able to infer which variable is actually categorical, and what is the orientation.

Solution: To fix this, we can use the orient parameter to explicitly tell the function to plot the graph horizontally.

Let us re-draw the plot with the added parameter:

We can very clearly see that there is a relationship between Alcohol levels and category of Wine.

One of the major problems with strip plots was the overlap of data points, which made it difficult to understand the density of points in some places.

Swarm plots are similar to strip plots, but the points are adjusted so that they don’t overlap.

We will be using the swarmplot() function. The syntax is:

Let us plot the variables tip against day from tips_data:

We can see, the plots are much cleaner than the strip plots. The breadth of the plots gives us a good sense of where most of the data points lie.

We can draw the following inferences:

You should have already come across boxplots before in a separate tutorial. But in case you skipped it, we’ve provided a short recap. 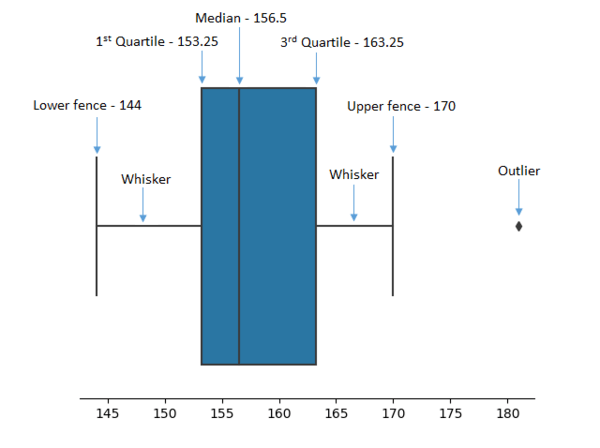 Box plot for the toy dataset

A box plot has the following components:

In other words, whiskers extend from the quartiles to the rest of the distribution, except for points that are determined to be “outliers”.

The syntax for plotting a boxplot is:

The orient parameter is used exactly for the same reason as we saw in the Swarm plot section — that is, to explicitly provide information about which variable is categorical.

Let us plot a graph between Proline and Wine from wine_data:

As we can see, the plot gives us a good view of the relation between proline and wine category, without actually plotting the individual data points.

Violinplots are similar to boxplots, but they have the added advantage that it also shows the actual underlying distribution of the data. 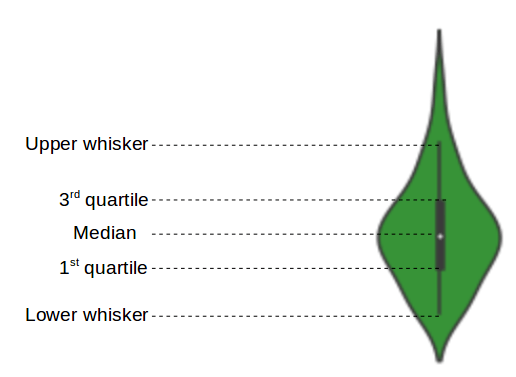 Note: Violin plot displays an estimate of the distribution of data using a method called kernel density estimation. This estimation procedure is influenced by the sample size, and violins for relatively small samples might look misleadingly smooth.

The syntax is as follows:

Let us plot again plot the Proline variable with Wine, but this time it’s a violinplot:

The orient parameter can be used for all the plots mentioned in this section - Strip plots, Swarm plots, Box plots and Violin plots.