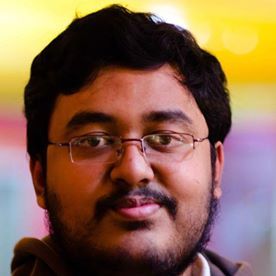 Hello everyone! I am Md Mahbubul Hasan from Bangladesh. I entered competitive programming world probably back in 2003 when I was in class 10. Unfortunately tutorials, editorials etc was not much available back then. Even there was not much of online competitions, except some regular monthly or bi-weekly contest at UVa, specially during the end of a year. It was difficult to access TopCoder from our country, even in 2005, because of slow internet and load shedding issues. We went to ACM ICPC World Finals in 2008 and 2009. Since then I am no longer devoted in programming contest as full time. But somehow I managed to float around in the same level through out the time. It was wonderful to compete with/against multi generation of contestants from our country. Nowadays I mostly take part in annual competitions where there is tshirt as prize. Even if it is not by performance, my luck does not disappoint me winning them in lottery!

Personally I have very low capacity hard disk (can't recognize people, can't recall names, even if you give me some problem which I solved a few days ago there is high probability that I would not be able to recall it and have to solve it from scratch). My network has high latency (poor reflex, need more time to response, that's why I can't bat well). But somehow my cache (short term memory) is quite active!

In my free time I watch movies, TV series, anime (Dragon ball is my favourite, do you watch it's new franchise Dragon Ball Super?). I also play video games some time but not that good, you know I have poor reflex!

Moderator note: We are very excited to host Mahbubul for a Q&A session! He has a max rating of 2463 (red) on Codeforces, and 2230 (red) on TopCoder where he has been active for 10+ years! He represented Bangladesh at International Mathematical Olympiad (IMO), has been the Bangladesh leader for International Olympiad in Informatics (IOI) multiple times, and also has a Bangla book on Programming Contests! Ask away...