Let us continue with the scenario where m models are trained on a dataset of n samples. Stacking (or stacked generalization) builds the models in the ensemble using different learning algorithms (e.g. one neural network, one decision tree, …), as opposed to bagging or boosting that train various incarnations of the same learner (e.g. all decision trees). 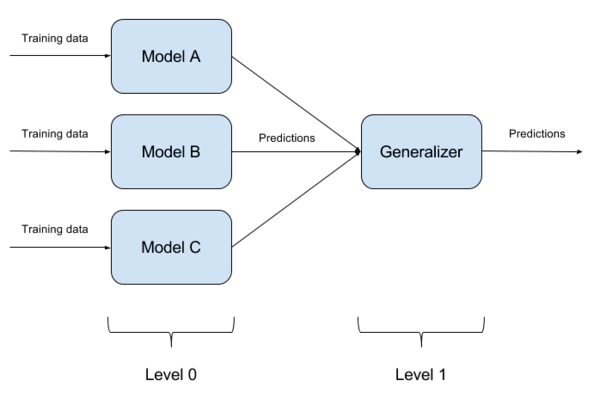 Although any machine learning technique can be used, the optimization problem typically involves least-squares regression:

Here, hj(-i) corresponds to the leave-one-out prediction generated by training hj over the subset of n-1 instances with the ith sample (xi, yi) left aside. Once optimal weights βj are estimated, base models hj are re-trained over the whole dataset and used to evaluate previously unseen instances x.

Based on the divide-and-conquer principle, mixture of experts (ME) trains individual models to become experts in different regions of the feature space. Then, a gating network (trainable combiner) decides which combination of ensemble learners is used to predict the final output of any instance x:

Here weights gj, called gating functions, are dynamically estimated through the gating network based on the current input data. They correspond to probabilities: 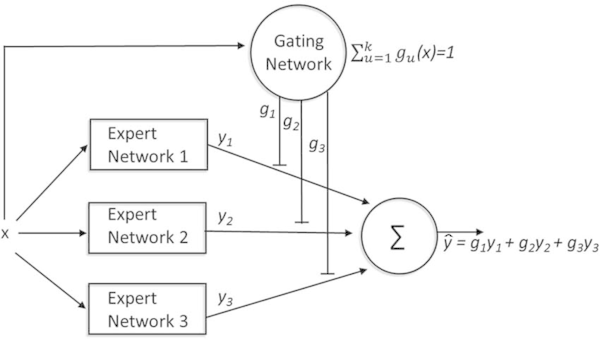 From the figure it is easy to see that this strategy resembles a neural network. Under this approach, experts (hidden nodes) can be chosen to be linear models with input weights θj: hj(x) = θjTx. Typically, the gating network is modeled by a softmax activation function for a soft switching between learners:

Weights θj and Aj can be trained using the backpropagation algorithm with gradient descent.

Stacking vs. Mixture of experts

Although both techniques use a meta-learner to estimate the weights of the ensemble learners, they differ on the nature of this combiner. Stacking learns constant weights based on an optimization criterion by means of a machine learning algorithm (e.g. least-squares regression). Mixture-of-experts, on the other hand, is a gating network that assigns probabilities based on the current input data (weights are a function of x).