Consider 4 gene sequences Human1, Chimpanzee1, Mouse1 and Fish1 from Human, Chimpanzee, Mouse and Fish species, respectively. We will also assume that these are homologous or equivalent genes that convert glucose to energy in their respective species. The hypothetical evolutionary tree of the 4 genes can be seen from the following figure. 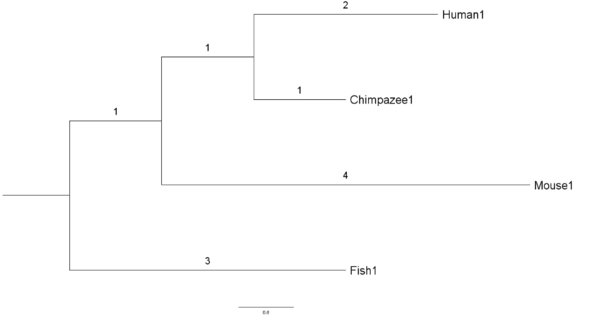 The branch lengths show the relative evolution of the 4 genes with respect to each other. For example, the Human1 sequence evolved twice as much as the Chimpanzee sequence after the split from the common ancestral sequence. The evolutionary distances between the gene sequences are the sum of branch lengths traversed from one sequence to another. For example, evolutionary distance between the Fish1 and Human1 gene = distance(Fish1, Human1) = 3+1+1+2=7

The tree shown above is called a rooted tree because the placement of the common ancestor of all the genes is exactly known (between Fish1 and the rest of the sequences). There is another version of the tree called the unrooted tree which is show below. 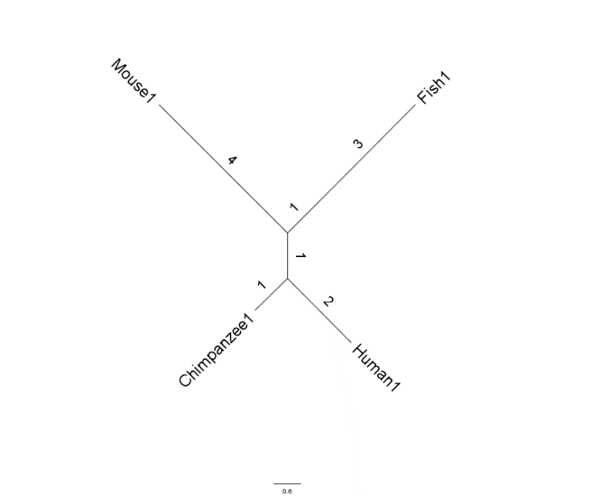 The unrooted trees only show relative relationships of the genes and does not have an exact point of origin or the placement of oldest common ancestor.

Scaled vs unscaled trees: Scaled tree has edge length drawn in proportion to a specific unit e.g. evolutionary time. Unscaled does not. 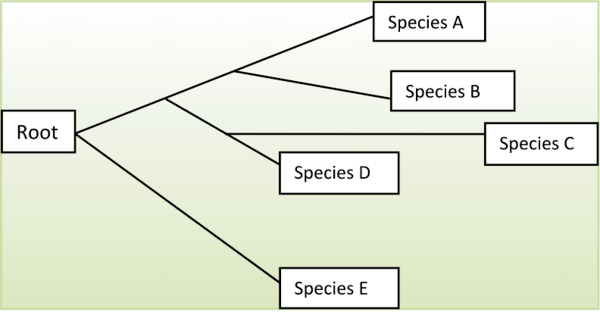 Molecular clock hypothesis assumes that the rate of evolution is constant in all the independent lineages and the branch lengths for all the present-day sequences in the tree is directly proportional to how far back in time the sequences diverged. Let us see this with the same previous example involving the 4 genes. 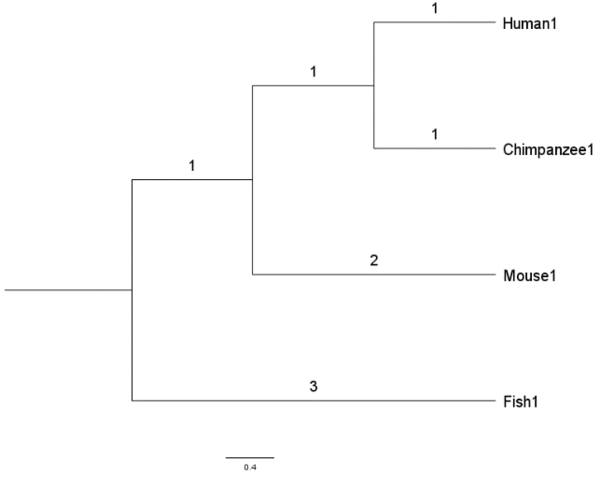 According to the molecular clock hypothesis, since the Fish1 gene has been evolving for longest time it should have the longest branch length in the tree and Human1 and Mouse1 should have equal and shortest branches because they have been evolving for the shortest time. It is as if each gene starts a molecular clock when it is formed and all the clocks tick at the same rate, therefore their branch length corresponds to the amount of time these clocks are ticking. The molecular clock assumption produces an evolutionary tree called the ultrametric tree.

The two important properties of Ultrametric trees are: