The Feistel cipher or Feistel Network is named after Horst Feistel, who developed it while working at IBM. He and a colleague, Don Coppersmith, published a cipher called Lucifer in 1973 that was the first public example of a cipher using a Feistel structure. Due to the benefits of the Feistel structure, other encryption algorithms based upon the structure and upon Lucifer have been created and adopted for common use.

Note: Please don’t be confused by the name Feistel cipher. Feistel cipher is not one particular cipher. It is a structure on which many ciphers such as the Lucifer cipher are based.

Overview of the Feistel Network

A Feistel cipher is a multi-round cipher that divides the current internal state of the cipher into two parts and operates only on a single part in each round of encryption or decryption. Between rounds, the left and right sides of the internal states switch sides. The image below shows a notional Feistel cipher with two rounds 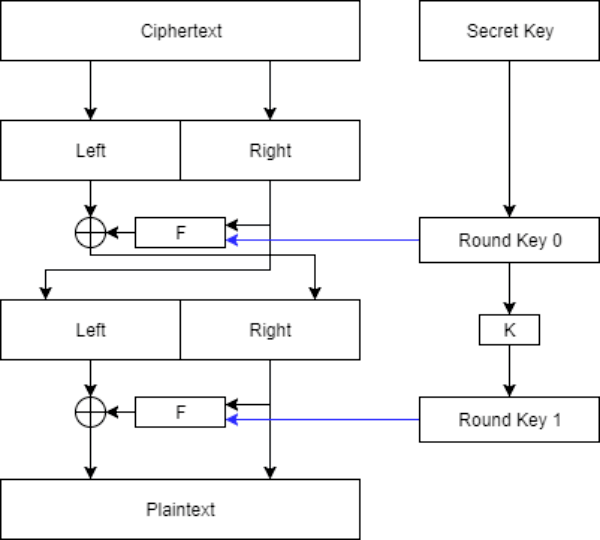 Diagram for encryption and decryption in a Feistel network.

The left side of the image shows the encryption of the plaintext to the ciphertext and the right side shows the creation of round keys via a key scheduling algorithm, K.

Encryption in a Feistel Network

The steps for encrypting with the example Feistel network are as follows:

In the next couple of sections, we will talk about the encryption part (steps 5 and 6) and the key scheduling part (step 7) of a Feistel structure in more detail.

As shown, the plaintext is split into two pieces. The right piece of one round becomes the left piece of the next. The left piece is exclusive-ored with the result of performing the function F on the right piece. The result of this is placed on the right side for the next round. This means that the two pieces of the original plaintext will be transformed in alternate rounds (since whatever is in the right side during a round moves on to the next round unchanged).

Feistel ciphers also have what is called a key schedule that acts as an input to each round of the cipher. There are two possible options for a key schedule.

The first is that the key for each round of the cipher (or “round key”) is included in the secret key shared by the two parties (resulting in a long shared secret key).

The other option is that the shared secret key is used as an input to a “key expansion” function (shown in the diagram as K), which performs some operation on the previous round key or the current internal state of the key generation algorithm to generate the next round key.

The K function transforms the initial secret key into round keys for each round of encryption. This function must be selected to maintain the key space of the encryption function. If a 64-bit secret key is required, but at some point the effective key space shrinks to 32 bits, then an attacker only has to search a space of 32-bit keys in order to decrypt the ciphertext.

Decryption in a Feistel Network

The steps for decryption in a Feistel network are as follows:

It may seem odd that the same operation can be used to perform and undo itself. To understand this, we need to take another look at the diagram of the Feistel cipher shown above.

Notice that this will only work for an operation that is its own inverse (like exclusive-or), which is why Feistel networks always use exclusive-or for changing the transformed half of the state in a round.

The Feistel structure does not clearly map to the cryptographic principles of confusion and diffusion. Confusion requires that each bit of the ciphertext is based upon several bits of the shared secret key. Diffusion means that a change of a single bit of the plaintext should change roughly half of the bits of the bits of the ciphertext after encryption (and vice versa after decryption). All of these properties must be handled within the round function, F, which is not specified as part of the Feistel structure.

Structural reusability: As we discussed previously, the same structure can be used for encryption and decryption as long as the key schedule is reversed for decryption. This is extremely useful for hardware implementations of ciphers since all of the encryption logic does not have to be reimplemented in reverse for decryption.

Ability to use one-way round functions: The other major advantage of Feistel ciphers is that the round function, F, does not have to be reversible. Most ciphers require that every transformation of the plaintext performed in encryption be reversible so that they can be undone in decryption. Since this is not a requirement for ciphers using the Feistel structure, it opens up new possibilities for round functions.