In  Part 1, we built a simple voting dapp and got it working on our local machine. In Part 2, we moved our app to use truffle framework and deployed it to the public Ropsten testnet and interacted with it through the truffle console and through a webpage. In this tutorial, we will add few more features to our voting dapp in order to learn a few key concepts. Here is what you will learn in this tutorial:

As you may know, in a general election, every citizen gets to cast one vote for their favorite candidate. However there are elections like electing a board of directors of a company where you are a shareholder, you get to vote based on the number of shares you own in that company. So, the more shares you own, the more votes you get.

Let’s enhance our voting dapp to support this type of election. We will add functionality for anyone to purchase shares in the company. They can then use those shares to vote for the candidates. We will also add a feature to lookup voter information. In the Ethereum blockchain world, these shares are more commonly referred to as tokens. We will refer to these shares as tokens in the rest of this tutorial.

If you want to skip all the explanation and want to just see the contract file, you can find it here: [https://github.com/maheshmurthy/ethereumvotingdapp/blob/master/chapter3/contracts/Voting.sol](https://github.com/maheshmurthy/ethereumvotingdapp/blob/master/chapter3/contracts/Voting.sol).

The first step is to declare the variables we need to store all the information we are interested in. Below are the contract variables with explanation.

In Part 1 and Part 2, we initialized the list of candidates contesting in a constructor. Remember that the constructor is invoked just once when the contract is deployed on the blockchain. Here, we also have to initialize the contract with total number of tokens available for sale and the cost of each token. So, we update our contract constructor like below:

In truffle, you deploy your code on to the blockchain using migrations. You can take a peek at a migration file here. An example deploy call in truffle migration file looks like this:

Now that we have initialized the tokens and set the price, let’s see how someone could purchase these tokens by paying ether. Here is the function to buy tokens.

The value: web3.toWei(‘1’, ‘ether’) argument is accessed in the buy() function using msg.value and msg.sender gives us the account address of web3.eth.accounts[1]. Assuming the value of each token to be 0.1 Ether, the web3.eth.accounts[1] will receive 1 Ether/0.1 Ether = 10 tokens.

Let’s take a break from looking at the code for a moment and visualize the interaction between accounts (voters) and the contract. 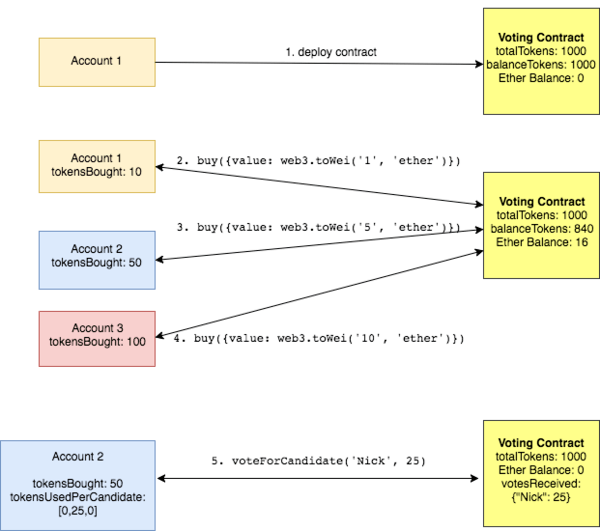 The index.html file has some new updates:

The app.js file has the updates to support all the UI functionality above.

Update the deployment file 2deploycontracts.js to pass in total tokens and token price along with candidate names.

To summarize, the four files we have updated in this tutorial are Voting.sol, index.html, app.js and 2_deploy_contracts.js. Once you have updated your truffle repository with these files, we can deploy the contract to the blockchain. The deploy process is exactly the same as the previous tutorial.

You just have to compile and migrate using truffle command.

If you are able to successfully deploy the contract and start your web server, your page will look like below: 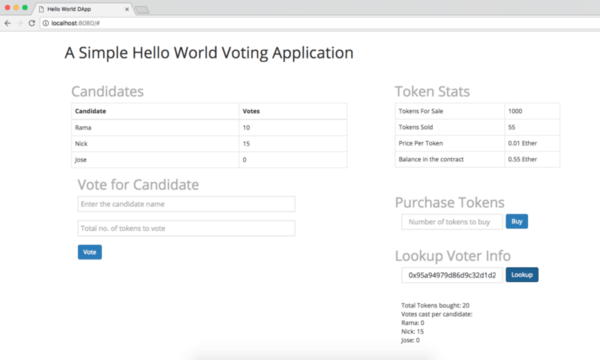 As you can see in the screenshot above, you will be able to purchase tokens, vote for candidates using the tokens and lookup voter information by their address. If you are able to get all these features working, congratulations!

I hope this series of tutorials has given you an idea of what Ethereum is, its capabilities, and how to build decentralized applications.

You now know just enough Ethereum to be dangerous :)