Gradient Descent is one of the most popular and widely used optimization algorithms.

Let’s say we are given a machine learning model (parameterized by weights and biases) and a cost function to evaluate how good a particular model is. Then, our learning problem reduces to that of finding the values of the model parameters which minimize the cost function. 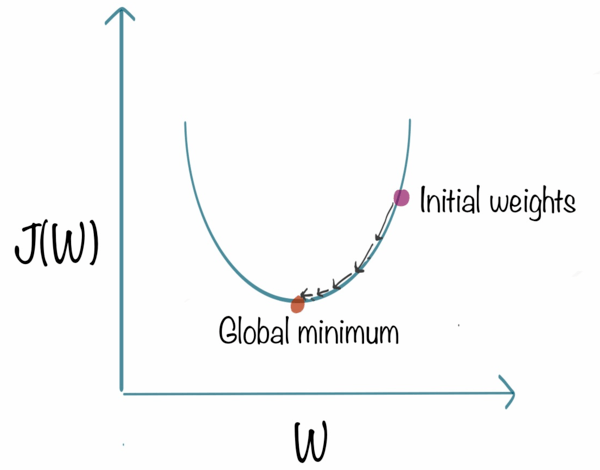 Gradient descent is an iterative method. We start with some arbitrary initial values for our model parameters (weights and biases), and improve them slowly. In each iteration, we try to get a sense of the value of the cost function for weights similar to the current weights (by calculating the gradient) and move in the direction in which the cost function reduces. By repeating this step thousands of times we’ll continually minimize our cost function.

Let’s say we want to minimize a cost function J(w) parameterized by model parameters w. The pseudocode for gradient descent is as follows:

The gradient G is defined as the derivative of the cost function with respect to the model parameters. That is, for the $i$-th parameter $w_i$, we have $G_i = \frac{\partial J(w)}{\partial w_i}$.

Note: If you don’t remember much about derivatives and calculus, that’s okay. Calculating the formula for the gradient is not the focus here.

Step 4: repeat till $J(w)$ stops reducing or some termination criteria is met.

Typically, we just check if the cost function reduced by at least 0.001 or some similar threshold. We may also have a limit on the maximum number of iterations allowed (say 10,000).

Let us see what the formula for the gradient G looks like for the case of linear regression. We have:

This is the mean squared cost function that you saw in the previous tutorial.

We will not show the step-by-step derivation of the gradients here since calculating the formula for the gradient is not the focus here. However, if you’d like to try, you will need to use calculus and in particular, the chain rule of differentiation.

Hence the updates are:

For linear regression, we can visualise gradient descent as follows: 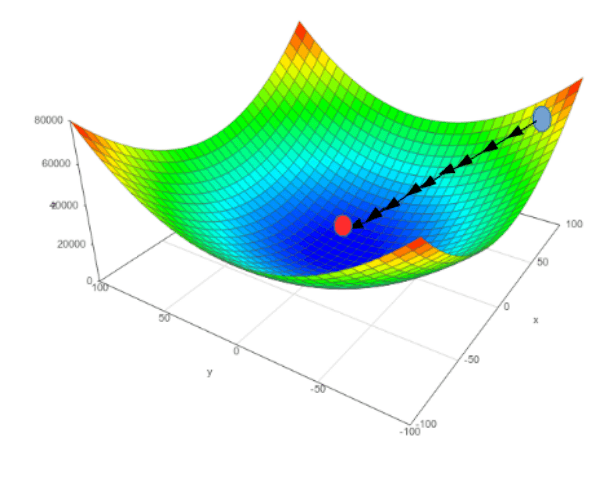 Here the x and y-axis represent the changing weight w1 and bias b. The function values in the z-axis is the cost function. As we change the weight and bias values we keep descending to lower values of cost function to arrive at the minima.

As we saw in the previous section, the cost function for linear regression is shaped like a bowl. Hence, there is only one minima, and gradient descent always proceeds in the correct direction.

In general, gradient descent is also used when the cost function’s shape is not that straightforward. In particular, the cost function may have more than one minima. In such a scenario, we may get stuck in local minimas, depending on the initial values of weights and biases we start our descent from.

Here’s an example where we start at two very similar values for the weights and biases, but end up at completely different minimas. 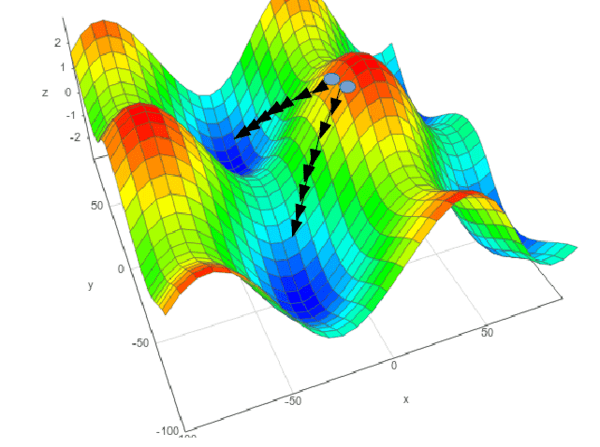 Gradient descent on a cost function with multiple local minimas

Imagine you’re blind folded in a rough terrain, and your objective is to reach the lowest altitude. One of the simplest strategies you can use, is to feel the ground in every direction, and take a step in the direction where the ground is descending the fastest. If you keep repeating this process, you might end up at the lake, or even better, somewhere in the huge valley. 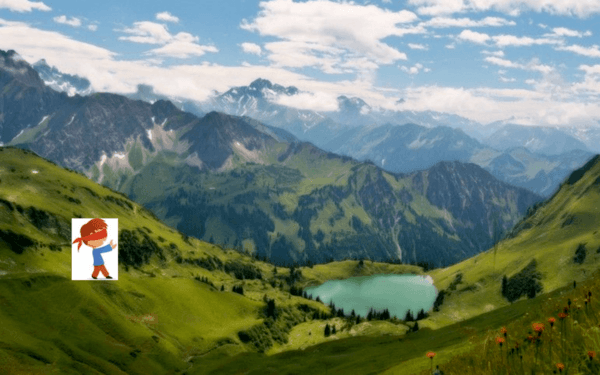 Typically, finding a good value for the learning rate requires some trial and error. 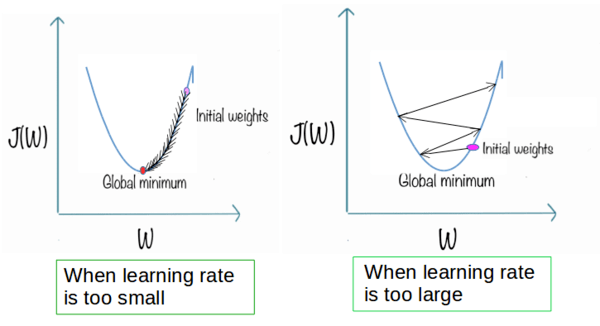 Given this information, we can use the following strategy for finding a good value for the learning rate.

We start with a small value such as 0.1, 0.01 or 0.001. Then, we adapt it based on whether the cost function is reducing very slowly or exploding.

Although manually choosing a learning rate is still the most common practice, several methods such as Adam optimizer, AdaGrad and RMSProp have been proposed to automatically choose a suitable learning rate.

If you would like to go deeper into this topic, here is a link for further reading: An overview of gradient descent optimization algorithms.

There are multiple variants of gradient descent depending on how much of the data is being used to calculate the gradient. The main reason behind these variations is computational efficiency. A dataset may have millions of data points, and calculating the gradient over the entire dataset can be computationally expensive.

Of these, SGD and mini-batch GD are most popular. In a typical scenario, we do several passes over the training data before the termination criteria is met.

Let’s take a concrete example which combines everything we learnt above.