In the second part of the project, we’ll implement querying using F expressions and Q operators, work with Django signals and receivers, and integrate the voting and searching logic throughout our models, views, and templates.

We want an easy way to update our comment_count every time a Comment is created.

This is where Django signals come in! They let applications get notified when certain actions have occurred in various places.

In a nutshell, signals allow certain senders to notify a set of receivers that some action has taken place. They’re especially useful when many pieces of code may be interested in the same events.

We will be using the built in Django model signals to automatically update our upvote, downvote, and comment counts.

On line 1, we use the @receiver decorator to specify that the function we’re about to declare will be the receiver for the post_save signal on the Comment model. This means that every time a Comment model is saved (including creation and edits), this receiver will be called.

In some circumstances, the code connecting receivers to signals may run multiple times. This can cause your receiver function to be registered more than once, and thus called multiple times for a single signal event.

To prevent the above scenario, we pass in a dispatch_uid which is just a unique identifier for the receiver. We’ll just set it to be the name of our receiver (i.e. comment_added).

Now, this receiver will be passed a created argument if this object was just created as part of it’s keyword arguments or kwargs. The instance argument refers to the Comment object that was just saved. Now, since we only want to update the comment count when a comment is created, we first check that created is True.

You may be wondering what that funky F operator is.

An F() object represents the value of a model field or annotated column. It makes it possible to refer to model field values and perform database operations using them without actually having to pull them out of the database into Python memory.

Again it’s considered good Django practice to handle updates like this at the database level instead of at the python level. Otherwise, you could imagine a case where two requests come to the server at the same time, and both load the existing comment_count (say its 2), and both set it to 3, whereas the right answer would be 4. By letting the database handle in, we ensure that the database is maintaining the consistency. On the backend, Django will just generate an encapsulated SQL expression. In our case, it instructs the database to increment the database field represented by comment_count by 1.

In lines 9-10, we simply update the comment_count by 1 and save the post.

Let’s talk a bit about what we want to support with the voting part of this project.

The first thing we’ll want to implement is a toggle_vote method inside of the Votable class. It will accept a voter, i.e. the user who is voting, and the vote_type which will be one of UserVote.UPVOTE or UserVote.DOWN_VOTE.

You will need to handle a few cases when you implement this function.

This method will only be called when the user does a upvote or downvote action, hence the name toggle_vote.

Here is our sample implementation:

It’s a direct translation of the cases we need to handle above.

Figuring out What a User’s Vote Is

Next we need to update the upvote and downvote counts after each user voting action. This sounds like a prime example for signals!

We’ll first give you some dummy functions that you can fill out that will be called from the signal, and will update the vote count for a comment or post.

Here is our sample implementation:

Note that we added self.[refresh_from_db](https://docs.djangoproject.com/en/2.0/ref/models/instances/#django.db.models.Model.refresh_from_db)() at the very beginning and end of this function. We do this because F expressions remain on the object through saves, so if you want to make sure you’re working with the latest values, you can call refresh_from_db to reload the object from the database.

This is a common gotcha when using F objects. Here is a simple example to illustrate this concept:

Say you have a hypothetical product object.

Notice how on line 5, the product’s price increased even though only the name was changed on line 3. This is because the F expression is still hanging around on the product object.

Here is what the final Votable class looks like now:

Now let’s go ahead and connect the above helper functions we wrote to the signals!

Go ahead and try coming up with the code wherever you see # Your code here.

Here is our sample implementation.

Some quick notes about our implementation above:

Try implementing the vote view function below that will take in a primary key of either a Comment or Post object, and a boolean is_upvote denoting whether the vote is an upvote or not.

Here is our implementation.

The first thing we need to do is have a way of converting the passed in pk to either a comment or post object. You’ll notice is that we call Votable.get_object and pass it the pk — we’ll implement this function in the Votable class in just a second.

We also convert the is_upvote boolean that is passed in to either a UserVote.UP_VOTE or a UserVote.DOWN_VOTE.

Other than that, we call our previously defined toggle_vote function and then redirect to post_detail. If the object being voted on is a comment, we need to find the post that it belongs to (i.e. line 6).

Let’s go back and implement the get_object function.

This is a staticmethod, i.e. one that belongs to the Model and not to any specific instance of the model. If we just have an eid, we’d want to know whether its a Post or a Comment. The code itself is quite simple. We just use our get_object method defined in BaseModel above to see if a Post or Comment with that UUID exists, and if so, we return it.

Let’s add the urls for up voting and down voting to reddit/urls.py.

Alright, back to the common instructions, regardless of Django version!

You can pass any extra arguments to your view function by passing in a dictionary. This is how we pass the is_upvote to the vote function in reddit/views.py.

First, we know we’ll need to hook up the get_user_vote function inside the Votable model to the template. Since we need to pass in the current user, and you can’t call a model method and pass it an argument inside the template, we will need to create a custom filter.

The actual syntax is super simple. We register the filter by using the @register.filter decorator. And we simply take the passed in user, and call get_user_vote.

Great, now we can implement vote.html.

All we do is display an up arrow, a count, and a down arrow. We add the text-success class if the user has upvoted or downvoted respectively, and the text-muted class otherwise. In between the up and down arrow, we show the score of the post using el.get_score. Remeber the get_score method we defined in the Votable class earlier? This is where we’re using it. Remember that el can either be a post or a comment.

How does the filter syntax work?

Custom filters are just Python functions that take one or two arguments:

We also hook up both the down and up arrows to their respective urls so that our views can handle it from there.

Let’s add this vote.html template to our other templates.

Go to post_detail.html, and include the vote.html template and pass in the el as the post object.

Gp to comment.html, and include the vote.html template and pass in the el as the comment object.

At this point, you should be able to upvote, downvote, see all your nested comments, etc! 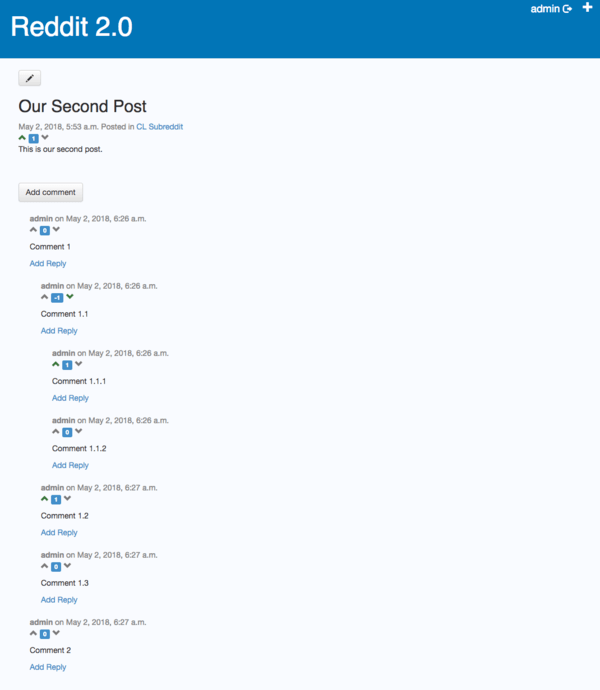 Our sample nested comments with votes.

This is the last part of this project. We’re going to add a way to search through all the posts.

Here are the set of tasks:

Add the form to the post_list.html template as well.

Here is our what we came up with:

Note that since the SearchForm is not tied to a model, there is no need to inherit from forms.ModelForm, so we can just use the simple forms.Form. Also a query isn’t required, so we set required=False.

In all our past views that dealt with forms, we’ve had the following pattern:

However, since we’re just doing a search, that data will be passed in via a GET parameter. As an aside, GET is an HTTP request method that specifies that data should only be retrieved, i.e. no changes to the backend are made via a GET request. A POST request actually causes some change on the server (like an object being created or modified).

On line 2 of post_list, you can see that we extract the query from request.GET. After that if the query is defined, we use a [Q](https://docs.djangoproject.com/en/1.11/topics/db/queries/#complex-lookups-with-q-objects) operator to do an OR lookup. A Q object allows us to do more complex queries. In the example above, we filter for posts where the query is contained within the post’s text or within its title.

When we call the render function, we also pass the SearchForm. Remember to pass the current query to the SearchForm in the initial argument so that the search field doesn’t clear every time the user searches.

We just define the HTTP method for the form as GET, and the rest is the same as other forms we have done.

We added the following css to our reddit/static/css/reddit.css file so that the search form and button appear in the same line. 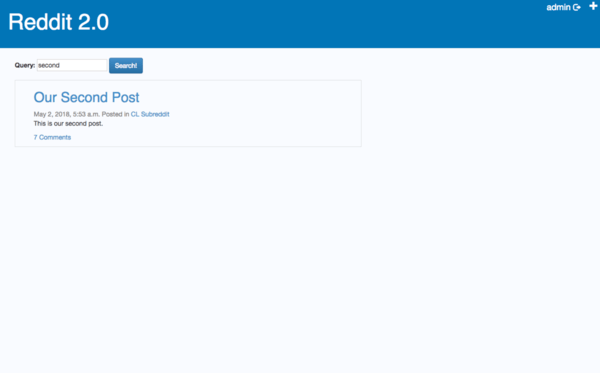 You’ve created your first fairly involved Django project and learned a lot of advanced Django functionality along the way. The best way to get better is to keep doing more practice. If you’re feeling adventurous, here are a few ways to make your Reddit clone even better!

The final code is also available here for your reference. If you’re using Django 1.11, use the final code here.

Note that, you’ll have to run the following commands after downloading the above project.