If you want to get good at building products that your users get into a habit of using, Nir Eyal’s book, Hooked, is a must-read primer on the topic. What follows is a summary of the book with its key takeaways so that you can get the gist of the book and get to work right away. If you have time, you should still purchase and read the book.

In the introduction, we get a useful definition of habits:

“automatic behaviors triggered by situational cues”: things we do with little or no conscious thought.”

And a clue why companies employ this tactic in the first place:

“Companies that form strong user habits enjoy several benefits to their bottom line. These companies attach their product to internal triggers. As a result, users show up without any external prompting.”

Examples of this behavior:

These are the internal triggers the author talks about.

The Hook Model describes an experience designed to connect the user’s problem to a solution frequently enough to form a habit. It revolves around four key factors that you have to think of: Triggers, Action, Variable Rewards and Investment that follows.

This is the main crux of the book, and is one of the most important concepts UX Designers should keep in mind while designing habit-forming products: 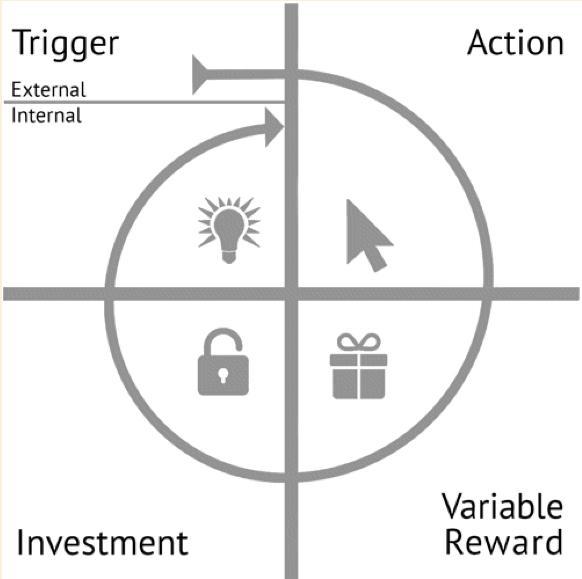 Triggers are the actuator of a behavior, and can be external or internal:

Very simply, it’s the behavior done in anticipation of the reward. As we saw in BJ Fogg’s Behavior Model, two things make the action more likely once the trigger is present:

With the promise of a reward, what draws us to act is not the sensation we receive from the reward itself, but the need to alleviate the craving for the reward. Remember, the variable quality of a reward makes us come back and want more of the thing

The investment phase increases the odds that the user will make another pass through the Hook cycle in the future:

The Hooked book goes into a lot of depth with examples, and is a very good read for anyone aspiring to build habit-forming products.

Credits: Parts of this tutorial were written based on the post by Zsolt Babocsai here.