K-nearest neighbors (KNN) is one of the simplest Machine Learning algorithms. It is a supervised learning algorithm which can be used for both classification and regression.

Let us understand this algorithm with a classification problem. For simplicity of visualization, we’ll assume that our input data has 2 dimensions. We will also assume that it is a binary classification task, i.e. the target can take two possible labels - green and red.

Here’s what a plot of our training data looks like. 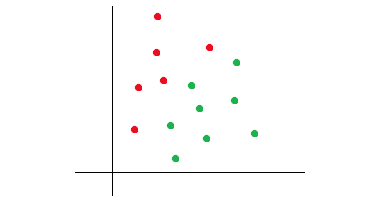 There is no explicit training phase in KNN! In other words, for classifying new data points, we’ll directly use our dataset (in some sense, the dataset is the model).

To classify a new data point, we find the K points in the training data closest to it, and make a prediction based on whichever class is most common among these K points (i.e. we simulate a vote). Here closest is defined by a suitable distance metric, such as euclidean distance. We will discuss other distance metrics later in the tutorial.

Let’s take a couple of examples.

Suppose we want to classify the blue point shown in figure below. We consider the K nearest data points and we assign it the class which is the most common among those K data points. 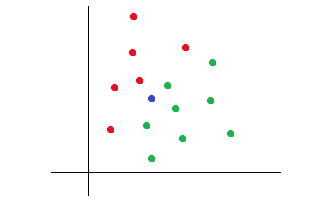 Let’s assume that K = 3. Then, we get 2 data points with green class and 1 data point with red class. Hence, we’ll predict green class for the new point. 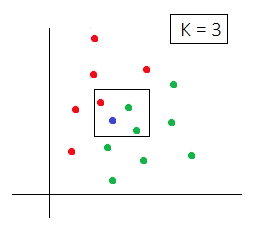 Here’s another example. This time the new data point (marked in blue again) is in a different position, and we will also assume K = 5 (instead of 3). 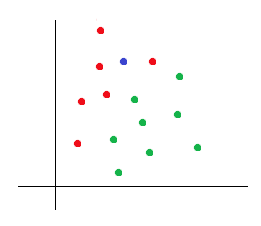 Since K = 5, we need to look at the 5 nearest neighbors. We get 4 neighbors with red class and 1 neighbor with green class. Hence, new point will be classified as a red point. 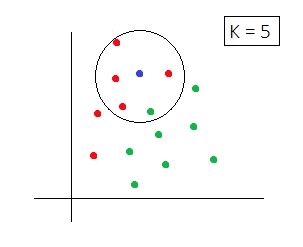 Above, we saw how to use KNN as a classification algorithm. In that case, we predicted whichever class was most common among the K closest data points.

In case of regression, when target variable is a real value, we take the average of the K nearest neighbors.

When K is small, the algorithm will only consider a few close neighbors of the data point we’re trying to make a prediction for. As K grows large, it will consider more and more neighbors. Initially, this will usually improve the accuracy by reducing overfitting.

However, as K gets even more large, we will start considering even far off points as neighbors of the current data point. As an extreme example, consider the case when K = N (the total number of data points). Then, all points in the training data will be considered neighbors, and we will always make the same prediction (whichever label is most common in the training data).

Hence, to pick a good value of K, we can perform hyper-parameter tuning using the validation dataset.

If performing hyper-parameter tuning is not possible, (say for example, if our dataset is large and we have very limited computational resources), a rule of thumb is to set $k = \sqrt{n}$ (square root of total number of data points).

There are various options available for distance metric such as euclidean or manhattan distance. The most commonly used metric is euclidean distance. 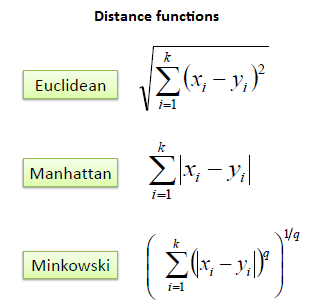 Below, you can see the geometric representation of Euclidean and Manhattan distance for points on the 2-dimensional plane. 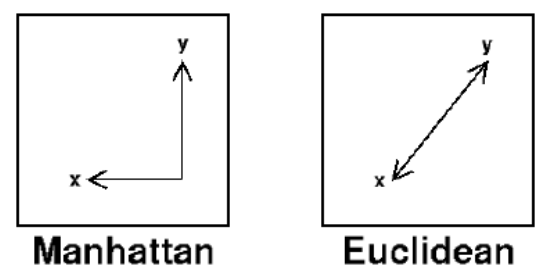 It is important to perform feature scaling / normalization on the data points before using them in K nearest neighbors algorithm. For example, we could make sure that for each dimension, the mean is 0 mean and standard deviation is 1).

Otherwise, the distance metric will give more importance to some dimension as opposed to other dimensions.

Let’s take a simplified example to understand this. Here’s the formula for the euclidean distance between the data points $x^{(1)}$ and $x^{(2)}$.

We will load iris dataset in sklearn.datasets for our KNN implementation. Let’s load independent variables to X and target variable to y.

Next, we scale X using StandardScaler before implementing the distance metric based KNN algorithm.

We split the data into train and test data, to enable evaluating the model trained.

Now, let’s fit the KNN model. We will set n_neighbors=5 .

Benefits of Parametric Models are:

Limitations of Parametric Models are:

In non-parametric models (like KNN), the training phase is quick or negligible. There are no parameters to learn (Or we can state that there are infinite parameters to learn). When a new test data point arrives, the algorithm then compares with the train data to predict the target value. So in non-parametric models, the training is quick compared to prediction.

Benefits of Non-parametric Models are: