Apache Kafka is a publish-subscribe messaging system that is distributed across many servers so that it can handle high volumes of data flowing through it. A messaging system is a type of application that helps transfer data from one place to another so that other applications can focus on doing other things rather than sharing data.

Below is a diagram of a simple messaging system:

The publish-subscribe messaging pattern refers to publishers (the senders of the messages) who publish (or send) a message without knowing which consumers will receive the message. These consumers or subscribers can subscribe to whichever messages they care about.

Kafka is a publish-subscribe (or pub-sub) messaging system. This is a little different than the above diagram because a producer publishes a message to the topic (message queue) and the message gets persisted to disk. Then multiple consumers can subscribe to the topic to get the message. The below diagram shows the differences: 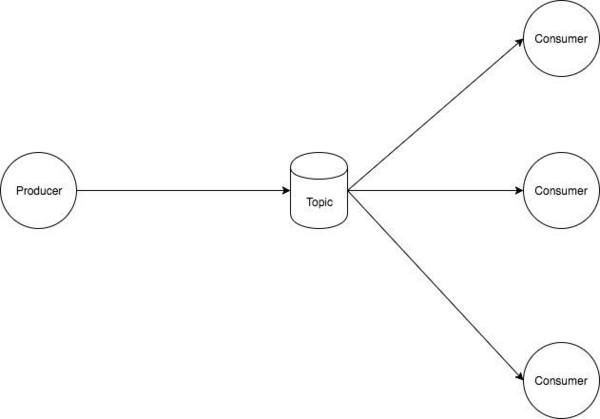 Let’s put all of those terms all together. One to many Kafka brokers make up a Kafka cluster. A broker houses one to many Kafka topics. Kafka topics can be broken down into partitions. When a message is committed to a topic, it is actually committed to a partition and given a specific offset. The other brokers make replicas of that data so that there is no data loss. A producer puts data into a specific partition of a topic on a certain broker and a consumer retrieves that data.

With all of these benefits, it is said that Kafka is very fast and can guarantee virtually no downtime and data loss.

Let’s actually see some messages flow through our very own Kafka cluster.

First thing’s first, if you are using a Digital Ocean instance, go ahead and create the instance like we did in the very first lesson. Once you are inside the Cloudera quickstart Docker image we can begin on the same page for everyone.

The first thing we need to do once inside the docker image is issue the following commands:

These commands simply install Kafka and put it into a certain directory (/opt/). Now let’s start our very own Kafka broker.

Awesome. Now there should be a Kafka broker running in this window. Don’t touch anything. We are going to open a brand new command line and get back inside of your docker container (if you’re on Digital Ocean just do the docker-machine ssh docker-sandbox). Run the following command:

This command just lists the various containers that are running inside docker right now. This is an example of our output but yours will be different. Copy the number under CONTAINER ID and then run the following command:

This allows you to have bash access to your container. Now you are inside of the same container in a different ssh session. First thing we are going to do while the Kafka broker is running in the other window is run the following command to create a topic:

Note that localhost:2181 is the default location for the Kafka zookeeper.

The first command creates a topic with the replication factor 1 and partitions of 1 with the name of test. The second command will just list all of the topics that are being tracked by zookeeper.

Now we are going to spin up a kafka console producer to actually write messages into the kafka topic that we just created. After you type the command on line 1, it will just wait for your input.

Now let’s spin up a kafka console consumer to pull the data out of the topic.

Great! You have successfully published some messages to Kafka and retrieved them. Keep these two windows open because we are going to need them here soon.

Apache Flume is a distributed, reliable, and available service for efficiently collecting, aggregating, and moving large amounts of data.

Let’s break that statement down: it’s distributed which makes it reliable and available. It collects, combines, and moves large amounts of data.

So in simple terms, Flume is a data ingestion tool that moves data from one place to another. Flume guarantees data delivery.

Let’s get a picture of what the Flume architecture looks like so we can talk about it. Reference the diagram below:

Flume has a very simple architecture that allows it the ability to pass data through with minor moving parts. It is great for taking streaming data in from the source and writing it to HDFS in batches. It can also write to HDFS in a near real time fashion if that is part of the use case, highlighting its flexibility. Id is defined by a configuration file.

Let’s write our own configuration file and take the data we wrote in Kafka (client) and put it into HDFS (destination). So in the window with the Kafka consumer from up above, let’s do the following:

Copy in the following. Go through the comments for each of the configuration lines.

We need to create the directory that we specified in our configuration file so run the following command:

Now we are going to start up the agent.

flume-ng agent is the name of the command and we are sending in base configurations of flume with --conf conf and then passing in our written conf-file with --conf-file ./kafkaFlume.conf. We then tell Flume what the name of our flume agent that we defined in our conf file with --name agent. -Dflume.root.logger-INFO.console is just setting the log level so we don’t get overwhelmed.

Go ahead and kick that off. Once you have that kicked off open another command line and do the same thing we did above to get back into the container. It’s copied here again for ease-of-reading.

This is an example of my output but yours will be different. Copy the number under Container Id and then run the following command:

Now start up a Kafka Console Producer and write some text while pressing enter after each line you want to send. When you start to do this you’ll start to see your Flume agent is outputting logs to the console.

This showing that Flume is correctly writing into HDFS. In the output above, Flume created a file called FlumeData.1519442562281. Yours will be different but copy that file name and run the following command to see if your output is in there:

Flume is a great ingestion tool and Kafka is a great messaging system that is widely used in the Hadoop ecosystem. The creators of Flume have integrated Kafka into all aspects of Flume. They also created a Flume channel that is actually a Kafka topic to help insulate Flume channels and give them more reliability (remember Kafka is super reliable). We already saw how we can grab data from Kafka using a Kafka source. We can also send Flume data to Kafka using a Kafka sink. It’s a pretty cool project that is worth mentioning.

Congratulation you have learned the basics of Kafka and Flume and actually setup a very common ingestion pattern that is used in Hadoop.