Linear Regression is a simple machine learning model for regression problems, i.e., when the target variable is a real value.

Let’s start with an example — suppose we have a dataset with information about the area of a house (in square feet) and its price (in thousands of dollars) and our task is to build a machine learning model which can predict the price given the area.

If we plot our data, we might get something similar to the following: 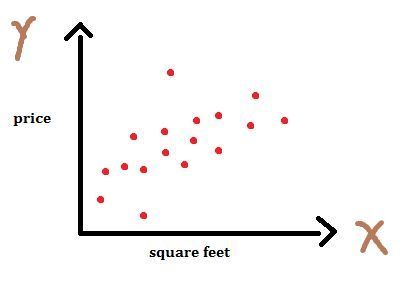 In linear regression, we “fit” a straight line to the above data points. Something like this: 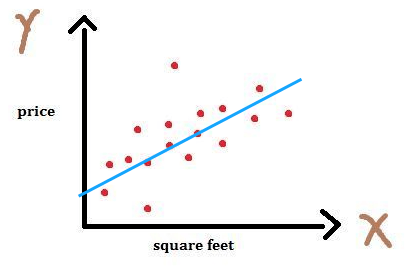 Now, let’s say someone constructs a new house and wants us to suggest at what price he / she should sell the house. Say the house has an area of 1550 square feet. So we look at our line, and we see that the y value corresponding to x = 1550 is about 200. 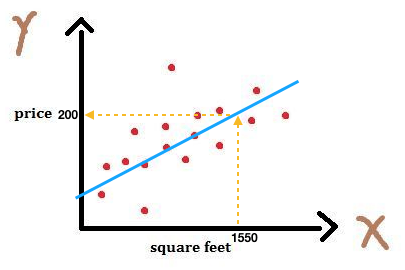 Hence, we would predict that the house will sell at an approximate price of $200,000.

In simple linear regression, we establish a relationship between target variable and input variables by fitting a line, known as the regression line.

Different values of b and w1 will give us different lines, as shown below:

Depending on the values of the parameters, the model will make different predictions.

The earlier equation you saw for linear regression, $y_{w,b}(x) = w_1x_1 + b$, can be used when we have one input variable (also called feature). However, in general, we usually deal with datasets which have multiple input variables. For example, in our house pricing dataset, we could have additional feature variables such as number of rooms in the house, the year the home was constructed, and so on.

The x’s are the various input dimensions. And we also have a model weight w corresponding to each dimension.

In the case of multiple linear regression, instead of our prediction being a line in 2-dimensional space, it is a hyperplane in n-dimensional space. For example, in 3D, our plot would look as follows 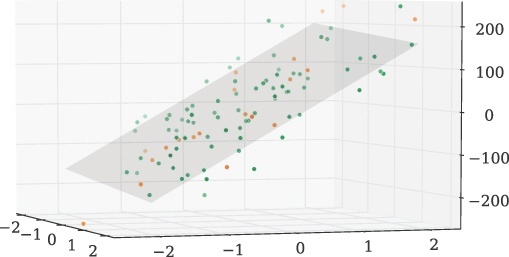 Let’s summarize all the mathematical notation we have introduced so far.

In addition, we will also use the following notation when we want to talk about specific data-points.

The cost function defines a cost based on the difference between target value and predicted value, also known as the residual. In the graph below, we have visualized the residuals: 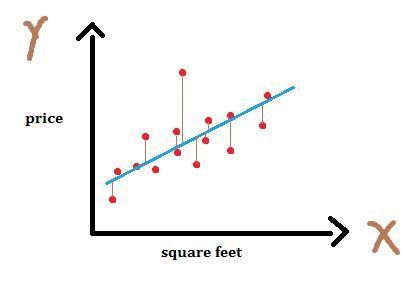 The cost function measures, given a particular value for the parameters b and w1, how close the predictions (y(x)) are to the corresponding targets (ytrue). That is, how well do a particular set of parameters predict the target value.

The cost function we use for linear regression is mean squared error. We go over all the data points, and take the mean of the squared error between the predicted value y(x) and the target value ytrue.

One question you might have is, why do we not use the sum of the residuals as our error function? Why squared? Why mean?

In this section, we will see the code for calculating the prediction and the cost function.

Next, let’s write the code for calculating the prediction and the cost function:

Finally, here’s some code for you to see a plot of the dataset (in red) and the model line (in blue). It will also display the value of the cost function.

Click Try It Now! and then Run on the code above to run it. You can also play around. Try out various values for weight and bias and see how the model line and cost change.

Hope you had fun with that!

Each value of the weight vector w gives us a corresponding cost J(w). We want to find the value of weights for which cost is minimum. We can visualize this as follows: 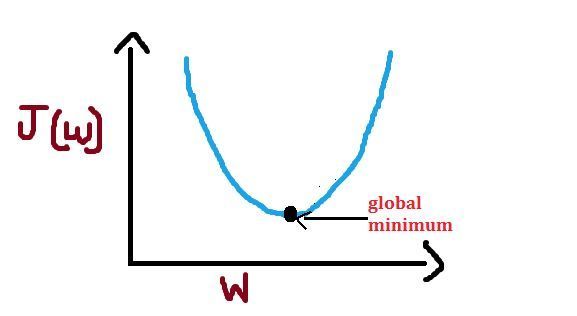 Note: Above we have used the word “global” because the shape of the cost-function for linear regression is convex (i.e. like a bowl). It has a single minimum, and it smoothly increases in all directions around it.

Given the linear regression model and the cost function, we can use Gradient Descent (covered in the next article) to find a good set of values for the weight vector. The process of finding the best model out of the many possible models is called optimization.