Once we start working with actual datasets, it might be very rare to find all the data in one place in the same file organised neatly. From time to time we will need to extract data from different sources, combine them in suitable form and only then can we proceed to do some work with the data.

In this tutorial we will learn about two operations — merge and concatenate — that can help us with combining DataFrames in different ways.

There are various ways in which DataFrames can be merged, depending on our needs. Let us take an example.

Suppose we have two Datasets: Left-Dataset and Right-Dataset as shown below.

Each student is known by their unique “Student_ID” number.

Now, when we decide to merge the DataFrames, we need to figure out what to do about discrepancy that arises due to all the scores not being available for all the students.

If we only need the data of the students who have all the three scores, then we could merge it in a way that only keeps the data of students who are common in both the DataFrames. It would look like below:

But maybe “Maths” was an optional paper for all students, and we are interested in the marks of all the students who have “Physics” and “Chemistry” scores, with the “Maths” scores if available. The resulting DataFrame would look like below: 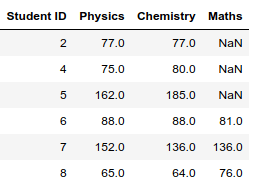 Note that if the “Maths” scores are not available, it says NaN (stands for Not a Number). We could substitute it with ‘Not Available’, ’Not Opted’, or any other appropriate special value.

What we saw above were examples of two possible ways in which merging can be done, based on how we want to combine the datasets.

In this section we will learn about four ways in which we can decide to join DataFrames.

Note: The decision to include or exclude rows from the DataFrames are based on the selected columns (one or multiple). In our examples, we based it on the “Student ID” column.

Let us now look at the kind of merges that we can perform:

INNER JOIN: In this kind of merging, we keep the rows which are common to both the DataFrames. This is also known as taking the intersection of the two DataFrames. 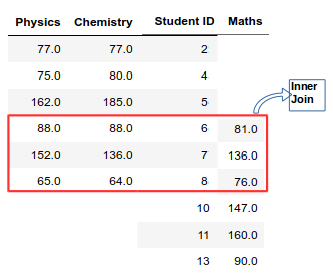 OUTER JOIN: We keep all the rows in this type of merging, even if it only appears in one DataFrame. This is also known as taking the union of the two DataFrames.

Whenever some column values are not available for a row, it is substituted with 'NaN' or 'Null' values. 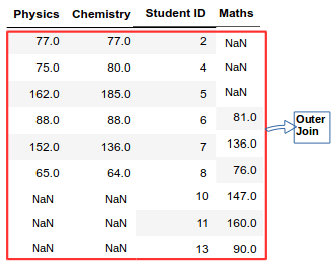 LEFT JOIN: In this, we keep all the rows from the left DataFrame, and only data from rows with matching values from the right DataFrame are used. 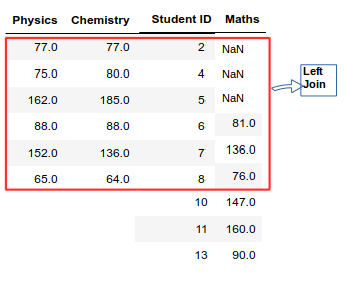 RIGHT JOIN: In this, we keep all the all the rows from the right DataFrame, and only data from rows with matching values from the left DataFrame are used. 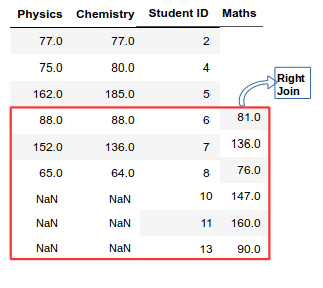 As in the previous tutorial, let’s start by importing the Pandas library.

We will be using two small data sets for exploring the different types of merge and joins. The datasets contain information about students from an engineering college. Some rows and columns, will be common across both the datasets.

Explanation of the features that appear across both the DataFrames:

Let us load the Datasets one by one, using the read_csv() method from Pandas and display the contents.

Now that we have loaded these datasets, let’s see how we can perform the above types of merge using Pandas.

The pandas library provides a function called merge() to perform merging of DataFrames. The syntax is as follows:

This returns a merged DataFrame. The original DataFrames remain unchanged.

It is also possible that the columns on the left and right DataFrame have different names. In such a scenario we separately pass the names of the columns for each of the two DataFrames based on which merging should be performed. The syntax is as follows:

Let us take a couple of examples see for ourselves how it works.

We will now perform the inner join on the df_merge1 and df_merge2 DataFrames. So the how parameter will have "inner" as an argument. (This is also the default value.)

We will perform the merge on Students ID. We can see that Student ID is common to both the DataFrames.

This will return us the merged DataFrame, where only the common values from "Student ID" will be kept.

Let us carry this out and see for ourselves:

We can see only the "Student ID" values which are common to both the DataFrames (11 to 21) have been selected and kept in the merged DataFrame, just as we expected.

Let’s also see an example of performing left join. We will take df_merge1 as the left DataFrame and df_merge2 as the right DataFrame:

This will return the merged DataFrame, where all the instances with values for "Student ID" from the left DataFrame will be kept. From the right DataFrame, only the rows which have matching "Student ID" values will be merged.

Let us carry it out and see the resulting DataFrame:

Instances from left DataFrame which do not have column values for the columns from the right DataFrame, have been filled in with NaN values.

Unlike merging, concatenation doesn’t look at values along a column to check for common elements. It simply places or glues DataFrames side by side (along rows index) or below one another (along columns).

Let us look at examples to clear this up. (We will be using subsets of the students DataSet which we have encountered earlier).

As in the previous section for Merge, let’s start by loading the dataset.

These datasets contain data of different students from the same college. The Student ID is unique for every individual student. The features have already been explained in the previous section on Merge.

The concat() function is used for concatenating DataFrames.

The syntax is as follows:

Concatenating along the columns

Now since the marks are of the same students, we would like to simply attach the df_concat2 DataFrame side-by-side or column-wise with the df_concat1 DataFrame.

We will do so by passing the argument “1” to axis parameter. The other parameters can have the default value for now.

Let us concatenate the two DataFrames and see:

So we see an example of concatenation along the columns. The two DataFrames are simply glued side by side and all the columns labels are concatenated.

Concatenating along the rows (index)

Now, let’s consider the case where two DataFrames have the same features for two different sets of students.

In such a scenario, we would like to attach the second DataFrame below the first DataFrame. This would give us a combined DataFrame with all the students.

We will do so by passing “0” to the axis parameter. Let the other parameters remain with their default value for now:

It is exactly as we wanted.

There is only one slight problem. If you notice the row index, they have been retained from the original DataFrames. We do not want that. We want the new DataFrame to have index from 0 to n-1.

We can do that by setting the ignore_index parameter to “True”. Let us do that and see.

Now our problem has been solved!

Now let us deal with a slightly more complicated case. The df_concat4 dataset is for a different set of students, and it also doesn’t have all the same features as df_concat1. It has some common features.

In such a scenario, we can concatenate in two different ways:

Let us see both the examples.

If we pass “inner” argument to the join parameter, and concatenate with axis=0, only common columns will be kept.

Let us see how it looks.

Outer join is also the default behaviour of the concat() function. Let us see how it works:

We can see that all the columns has been retained and NaN has been used to fill up columns which are not common.