"Rest not. Life is sweeping by; go and dare before you die. Something mighty and sublime, leave behind to conquer time."

Created on Day One of the Design Across America Zerflin tour. Quote submitted by Jason Candio. Font by Neale Davidson from PixelSagas.com This quote is originally from a poem Goethe wrote titled "Haste Not; Rest Not!". You can read the full poem here: http://books.google.com/books?id=c4FPAAAAYAAJ&pg=PA453&dq=

Better known as Mother Teresa, Agnes Gonxha Bojaxhiu was an Albanian born Indian Roman Catholic Nun, who from the age of 12 after being impressed by a group of missionaries, committed her life to serving Christ. She wrote to her Sisters, "To the good God nothing is little, because He is so great and we so small—that is why He stoops down and takes the trouble to make those little things for us—to give us a chance to prove our love for Him. He makes them; they are very great. He cannot make anything small; they are infinite. Yes my dear children, be faithful in the little practices of love, of little sacrifices—of the little interior mortification—of the little fidelities to Rule, which will build you in the life of holiness—make you Christ-like." (Mother Teresa: Come Be My Light, By Mother Teresa, Brian Kolodiejchuk)

Created especially for Gallery 788's 1st Fashion Show, I was searching for quotes on fashion that weren't defaming or snobbish.

He said this in an interview for an article called "50 Days of Everyday Fashion" in Yours magazine.

A city thrives or falters on the visions of its citizens

These were created in the style of the Who Said What Art Show to honor Walter Sondheim, Jr., the Baltimore visionary who helped desegregate city schools and develop the inner harbour. They were handed out as awards for the 2013 Sondheim Honorees by the Mayor of Baltimore.

"Morality is Temporary, Wisdom is Permanent."

The quote lies in a book called Kingdom of Fear: Loathsome Secrets of a Star-Crossed Child In the Final Days of the American Century, penned by Thompson and published in 2003. The quote was in a response to a story he tells about how when he was 9, he and his friends tipped over a mailbox in front of a bus (the driver of which was especially cruel to him and his friends). Tampering with mail, of course, is a federal offense, and it brought two Federal Agents to his door. They began questioning him, accusing him of the deed, and saying that all his friends had ratted on him. However, he had the gall to question them on this, and when they weren't able to prove they had gotten any confessions or witnesses, they left.

This piece replaces the now-unavailable Lois McMaster Bujold piece that was originally part of the 20 initial Who Said What pieces. It was later discovered that the Bujold quote was misattributed, and all copies were destroyed.

A timelapse video showing the creation of this piece...

"It always seems impossible until it is done."

Created on Day Twenty of the Design Across America Zerflin tour. Quote submitted by Lauren Lofton. Font by Ryoichi Tsunekawa of Dharma Type.

The quote is attributed as being Mandela's from many sources, though there are people on Wikiquote researching and tracking it down to its original origins. Publications no earlier than 2007 seem to contain the quote. Mandela has been an inspiration to me as a leader and as someone who has committed their entire life to racial equality. It's the perfect way to end the Design Across America Zerflin tour.

"I love you because I know no other way."

Pablo Neruda is a poet and politician from Chili who earned the Nobel Prize of Literature in 1953. This quote is a part of one of his love Sonnets, Sonnet XVII.

I was literally putting the finishing touches this piece to send as a birthday present for my friend @DeRay late on July 10, 2016. Some people on Twitter sent me his Periscope to watch the ‪#‎BatonRouge‬ protests live. I watched live as he was tackled from behind and arrested. Brittany eventually got his phone, calmed everyone down, and started getting people organized. He was eventually released, but was one of hundreds of people wrongfully arrested that night.

This piece is not for sale. 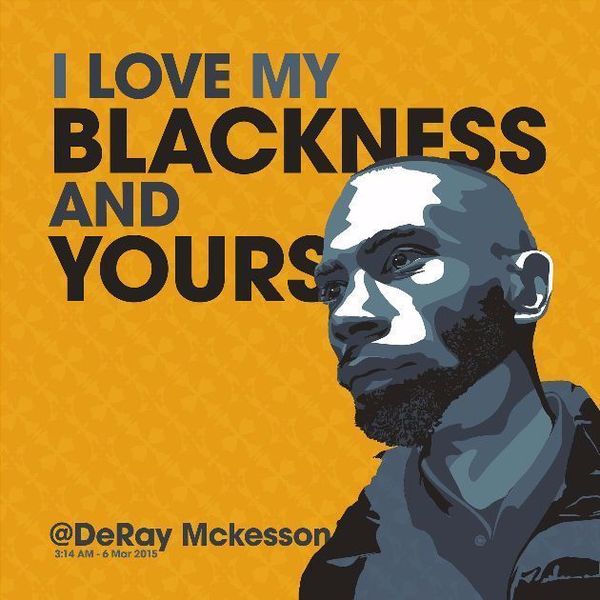 The world is full of suffering, but it is also full of the overcoming of it.

This quote was in an 3-part essay Helen Keller originally wrote when she was only 23 entitled "Optimism." The full passage reads, "Although the world is full of suffering, it is full also of the overcoming of it. My optimism, then, does not rest on the absence of evil, but on a glad belief in the preponderance of good and a willing effort always to cooperate with the good, that it may prevail. I try to increase the power God has given me to see the best in everything and every one, and make that Best a part of my life."

The quality of a person's life is in direct proportion to their commitment to excellence, regardless of their chosen field of endeavor.

This was created for Reddit's 2014 Arbitrary Day; Benjamin was paired with redditor Faffri, who is a big fan of the Green Bay Packers. Lombardi immediately came to mind, and the piece was born! A video of the creation of this piece can be seen here: