Yes, that makes a lot of sense. Great comment, but a very sad one.

In the showrunners’ post-episode dialogue, they clarify what transpired between Arya and her dire wolf Nymeria.

Arya’s last words as Nymeria turned and left were “that’s not you.” Turns out she was quoting herself replying to Ned Stark when he’d attempted to interest her in a book of fancy gowns, telling her she would someday grow up to be a fine lady and marry. She told him, “no, that’s not me.”

Like Arya, Nymeria was never meant to be domesticated. The soulful look on Arya’s face as her dire wolf padded away was her acceptance of this.

Great scene. Like Theon reverting back to Reek, Nymeria's choice was more realistic than one expects from a fantasy show like this.

I found this image elsewhere on the web, but seems like the book Sam was reading has a mention of dragon glass being a cure for something (red underline mine!): 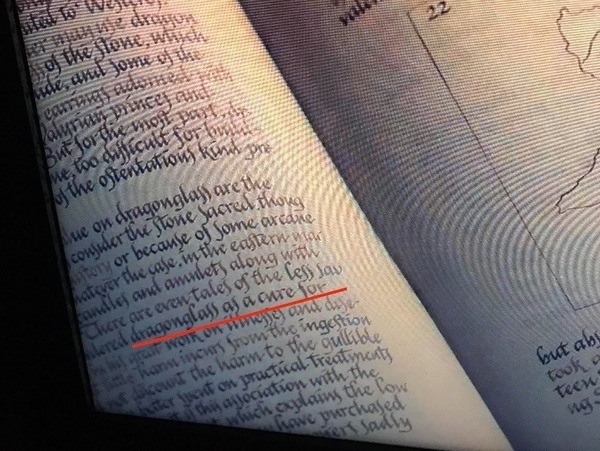 My thought was that having greyscale might end up being an unforeseen advantage for managing dragons or resisting White Walkers.

As is, people die of it, but after ingesting dragon glass, it might become more manageable. I still think Jorah will die, but that it will be a heroic sacrifice of some kind. For example, being covered in stone-like scales might enable him to last longer at some horrific task than a normal person could.

So where will Jorah's storyline go? Surely he won't just die of greyscale, after a touching reunion with Dany, à la the leper scene in Ben Hur (see link below)? Die, maybe, but not "just die." I have to think he gets a redemption arc of some kind.

Somehow, him contracting greyscale will end up being...

Tyrion was my guess. But someone else pointed out that in the books Euron comes to possess a Valyrian horn that kills whoever uses it yet supposedly controls dragons.

Wonderful start. I thought they did a good job of balancing the time spent on each storyline. Also a nice mix of plot movement and character development.

I don't think MIB has been in the park non-stop for a year since his wife died. He keeps telling the hosts he is running out of time. I think he has only 28 days per visit and then has to return and start over, which he finds incredibly frustrating.

As to what happened 30 years ago, we can only guess. Despite the writers' relentless clues suggesting that William becomes MIB, I still leave open the possibility that this is actually Logan we're seeing 30 years later.

If so, William dying would have been another of those painful shocks that helped Dolores scramble her programming.

Nothing goes on inside the park without Ford knowing about it, at-least it seems. We really don't know who Wyatt is, we cant rely on Teddy's memory of it, so it has me wondering.. We see homes...

Someone has to be the Judas steer. So either Dolores or Maeve.

That seemed odd to all of us I'm sure. My best guess is that one has to physically be in the Behavior section to access higher-level code functions, and that once there, she was able to hack her way into places she should not be.

I think she only needed Felix to complete the process manually after she was rebooted.

My favorite part of that scene was how she was perceptive enough to understand Felix better than Sylvester did . . . and gambled everything on it.

She did cut MIB's throat. You can see the blood on it in the next scene. It just wasn't a deep cut.

But otherwise I totally agree.