We already learnt a little bit about strings in Python3 Basics: Strings and Functions, but in this tutorial we are going to go a little deeper and also see some helpful functions Python provides for strings.

String literals can be enclosed by either single or double quotes, although single quotes are more commonly used. For example, 'Hello World' or "Hello World".

Characters in a string can be accessed using the standard [ ] syntax. Remember, Python uses zero-based indexing (like most other programming languages).

If the index is out of bounds for the string, Python raises an error. The Python style (unlike some other languages like Perl) is to halt if it can’t tell what to do, rather than just make up a default value.

The len(string) function returns the length of a string. The [ ] syntax and the len() function actually work on any sequence type — strings, lists, etc. Python tries to make its operations work consistently across different types.

Python newbie gotcha: don’t use len as a variable name to avoid blocking out the len() function. 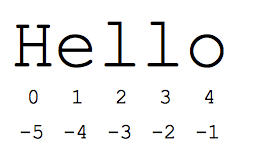 Just like in indexing, negative numbers can we used while slicing too.

It is a neat truism of slices that for any index n, s[:n] + s[n:] == s. This works even for n negative or out of bounds. Or put another way s[:n] and s[n:] always partition the string into two string parts, conserving all the characters.

The + operator can concatenate two strings.

Here are some of the most common string methods. A method is like a function, but it runs “on” an object. If the variable s is a string, then the code s.lower() runs the lower() method on that string object and returns the result (this idea of a method running on an object is one of the basic ideas that make up Object Oriented Programming, OOP).

Here are some of the most common string methods:

s.lower(), s.upper() — returns the lowercase or uppercase version of the string. Example:

Note: The string s itself is not modified. Python string methods usually return a new string.

s.strip() — returns a string with whitespace removed from the start and end

s.isalpha() / s.isdigit() / s.isspace() … — tests if all the string characters are in the various character classes

s.find('other') — searches for the given other string (not a regular expression) within s, and returns the first index where it begins or -1 if not found

s.replace('old', 'new') — returns a string where all occurrences of 'old' have been replaced by 'new'

s.split('delim') — returns a list of substrings separated by the given delimiter. The delimiter is not a regular expression, it’s just text.

As a convenient special case s.split() (with no arguments) splits on all whitespace chars.

s.join(list) — opposite of split(), joins the elements in the given list together using the string as the delimiter.

A google search for “python str” should lead you to the official string methods — Python 3.7.0 documentation which lists all the str methods.

Multiline expressions: The above line is kind of long — suppose you want to break it into separate lines. You cannot just split the line after the % as you might in other languages, since by default Python treats each line as a separate statement (on the plus side, this is why we don’t need to type semicolons on each line). To fix this, enclose the whole expression in an outer set of parenthesis — then the expression is allowed to span multiple lines.

In this tutorial, you learnt about