A Support Vector Machine (SVM) is a classification algorithm, typically used for binary classification. An SVM with gaussian kernel has been consistently shown to be one of the best machine learning models, achieving the highest accuracy in a large variety of datasets, especially datasets which do not involve images or audio.

Given a binary classification dataset, an SVM aims to find a separating hyperplane between positive and negative instances. For example, in the figure below, each of the blue lines is a plane which separates the positive and negative data points. All blue points lie on one side, and all red points lie on the other rise. New unseen samples are categorized based on the side of the hyperplane in which they fall. 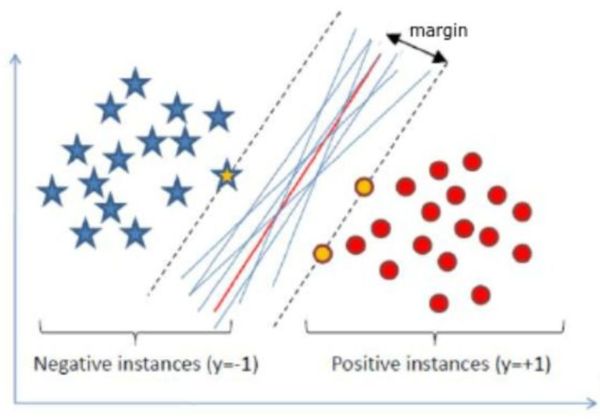 Each of the blue lines (separating hyperplanes) classify all data correctly, but the red line is the max-margin classifier. Image source: ResearchGate

In the illustration above, the red line is the maximum-margin classifier, and the data points marked in the yellow are the corresponding support vectors.

The main reason for preferring the max-margin classifier over other hyperplanes is that intuitively, it is expected to perform better on test data / unseen data.

Consider the following example, if new data points were added to this dataset, we would expect classifier A to perform better than classifier B, since classifier B is very close to one of the green data points. 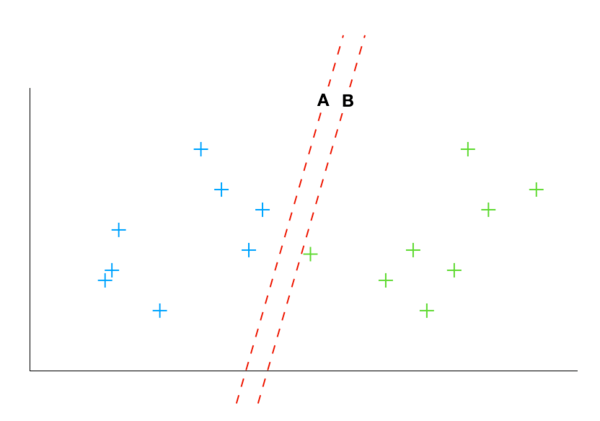 What if data is overlapping? Soft-margin

Although linearly separable datasets are nice, in practice those are difficult to find. For overlapping datasets, the SVM algorithm includes a regularization parameter (usually denoted as C), which controls how important it is to avoid misclassifying data points. 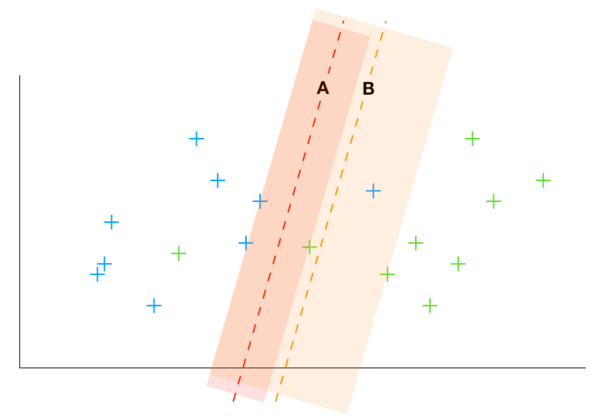 In general, if the dataset has more outliers, we want to allow for more data points to be misclassified. In practice, we try many different values for the hyper-parameter C, and choose the one that performs best on the validation dataset.

What if optimal classifier is not linear? Kernel trick 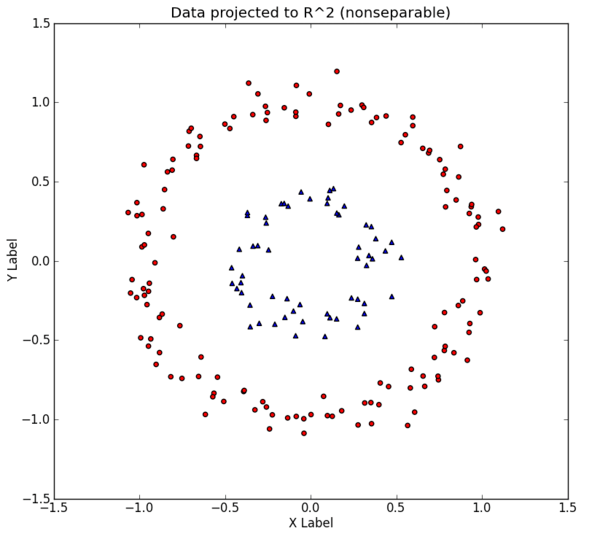 This problem can be solved by introducing new dimensions, or mapping the data to a higher dimension. For example, let’s define a third dimension z, where $z = x^2 + y^2$. Now, when we plot the data, we get the following plot: 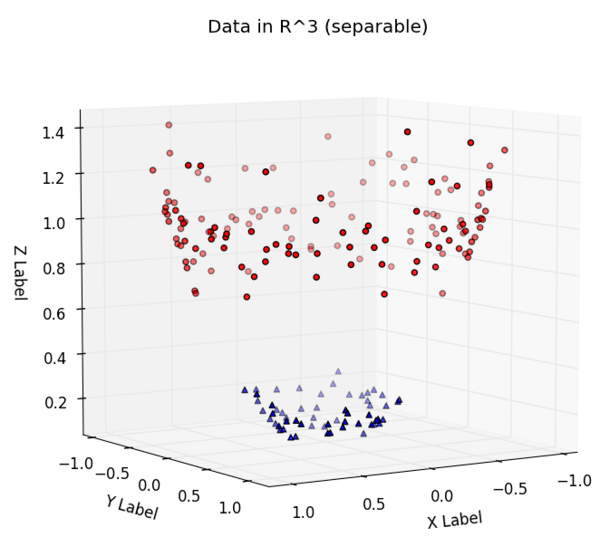 Now, it is possible to separate the data with a linear hyperplane.

Data projected to 3D and the linear hyperplane that separates it.

Finally, we can also look at what the decision boundary looks like if the project it back to our original 2D dataset. 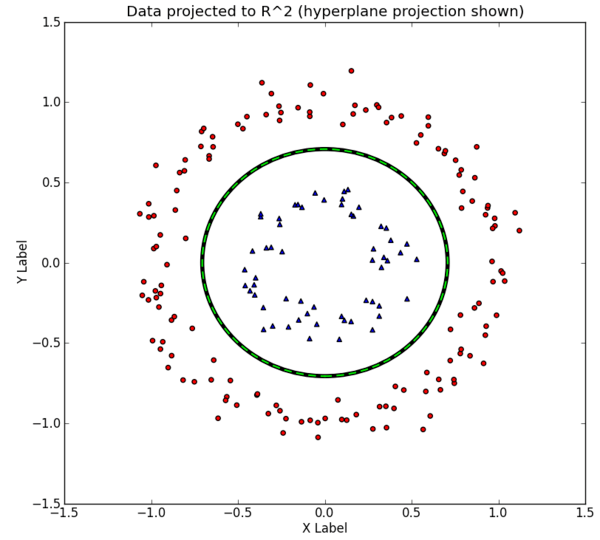 Hyperplane projected back on to the 2D dataset

As we can see, the learnt decision boundary is a circle. In summary, projecting the data to a higher dimension allows us to learn classifiers which are non-linear with respect to the original data.

There are two more important things to know about SVM kernels:

Finally, SVM provides us with a third powerful hyper-parameter (apart from regularization parameter C and choice of kernel). This hyper-parameter, typically denoted by $\gamma$ (gamma), controls how far the influence of each data point reaches. 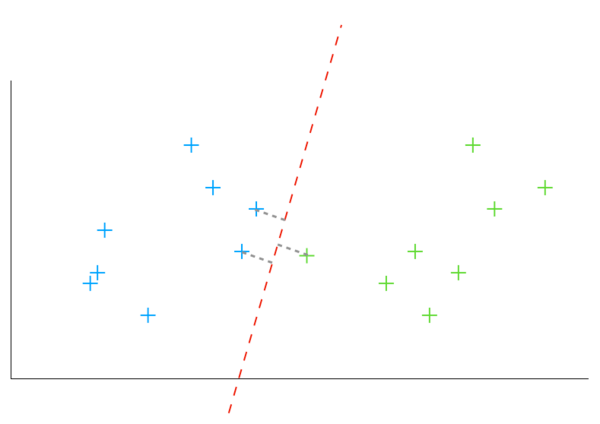 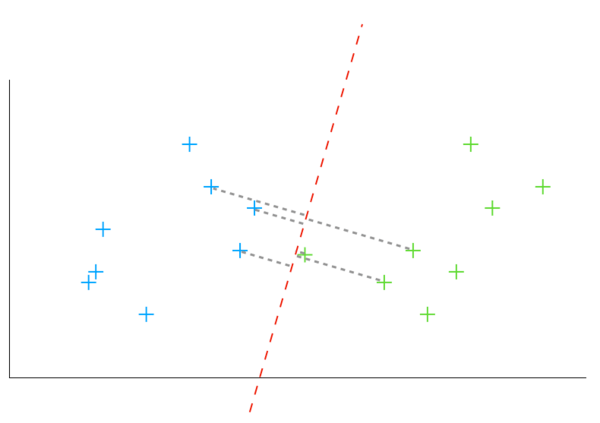 So far, only the binary classification model was described. SVM can be extended to be used on a multi-class dataset. There are two popular options:

Putting things together with code

Out of the above arguments, the following are the most important ones (most have already been discussed in the tutorial):

Here’s a sample interaction for training the SVM

SVM with Gaussian kernel has been consistently shown to be one of the best machine learning models for a large variety of datasets (specially non-media datasets, where the input isn’t an image or an audio).

If you’d like to read about the theoretical background behind SVMs, check out our tutorial on Support Vector Machine (SVM) Theory, which is part of Machine Learning Algorithms Course.