Technical analysis is the art and science of predicting future price movement based on its historical movements. This analysis uses charts which consist of price movement and possibly technical indicators to predict where the price is heading on the short, medium, or long term.

Experienced technical analysts usually focus on the price movement as the most important indicator for their analysis. This is a prudent approach as all technical indicators are derived from price action.

There are many ways to visualize price action. It can be visualized using the line chart, or Japanese candlestick, or bars, among many other ways. Each visualization method has its own advantages.

The line method helps smooth extreme market fluctuations and is better for longer term investment decisions. The advantage of using this chart is simplicity. The line chart greatly reduces the noise and is better for seeing trends. On the other hand, you may miss out on some important information related to sentiment with the line chart since it tends to not show extreme peaks and troughs and smooth them out. 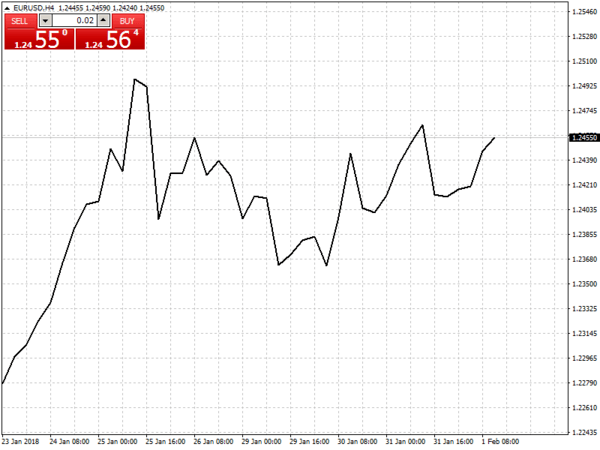 Candlesticks, on the other hand, can give a better reading into the sentiment of traders in the market, candles may appear in one of two different colors depending on whether the price increased or declined within the specified time period.

Candlesticks are widely popular and offer many advantages. They help identify trend continuation or trend reversal, and help you make an earlier entry or even exit when the conditions are no longer favorable. They also make it easier to gauge volatility using the length of their bodies. Moreover, you can identify opening and closing price at a glance using candlesticks. 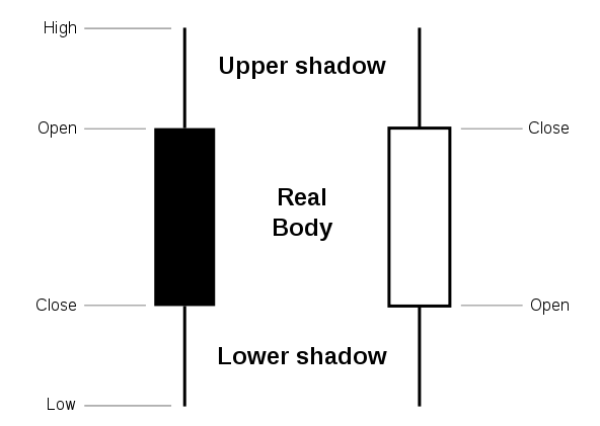 The shadow shows you the highest price and the lowest price, as indicated by the top and the bottom of the shadow respectively. 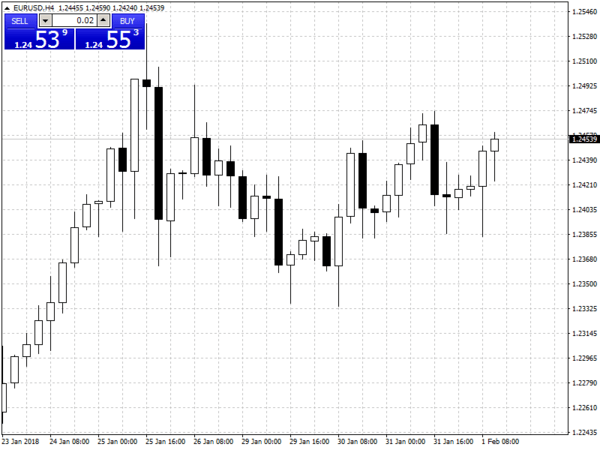 Bar charts are rather a more simplistic way of showing trading data within a single period of time (hour, day, week, etc.) without the coloring that can be distracting sometimes. 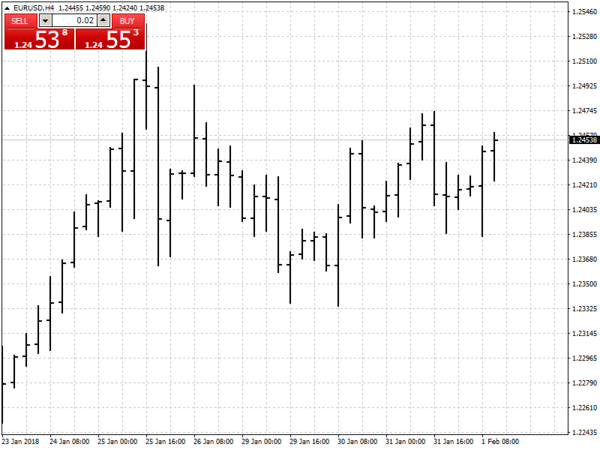 To better understand price actions, traders often tend to draw a line at important price levels. The price of a financial asset often turns at certain price points more than once. If the price level proves to be significant (the price tends to reverse at this level more than twice), then this can be used as a valuable piece of information. Those price levels are called support and resistance levels. Support and resistance lines are horizontal lines, as opposed to sloping lines (trend lines), which we shall see later.

Looking at the picture below, you can see a green line and a red line. The green line is considered as a resistance line since obviously, the price could not rise above it on more than two occasions. The red line is considered a support line since the price could not drop below it on more than two occasions.

Technical indicators can be classified into different categories based on their nature. The most famous categories are trend indicators and oscillators.

Oscillators on the other hand, such as the RSI, MACD have different uses. They oscillate between two values from 0 to 100 and can be useful when the market is moving sideways and can help when you are trying to count market waves.

What is a Market Wave?

Traders look at market waves differently, and as a result two traders can identify two different waves on the same chart. For that reason, it may be difficult to define what a market wave is. However, for the sake of simplicity we will define a market wave as a consistent movement of the price in one direction (either upwards or downwards). This is not to say that this movement will not involve smaller movements in the opposite direction.

For example, if you look at the USDJPY chart below, you can see a long wave downwards (between the two violet lines). This can be considered as a one wave, and if you look closely you can see small upward movements of the price inside that big wave. 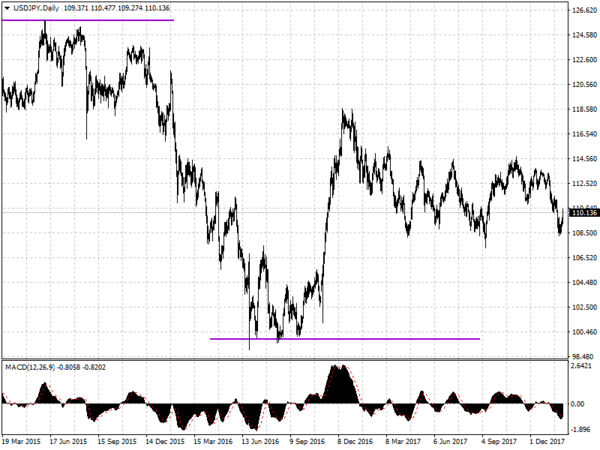 When the market is not in a trend, that is, it is not consistently rising on declining, or moving within channels, then it is moving in sideways.

A moving average is simply an average of a certain number of price values, and it moves forward by one period at each period of time.

Say the closing price of a stock was the following:

If we want to calculate a 3 day (the period) moving average, we would have the following values: 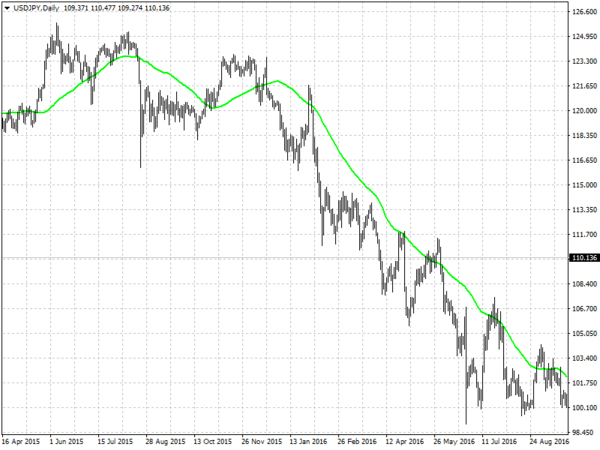 Another way the MACD can be used is by adding a 9-period moving average to the MACD itself. When the MACD indicator crosses over this moving average below it to the upside, it is a signal that the price is likely to go upwards. On the other hand, if a crossover happens from above it to the downside, then it is a signal that the price may be going downwards. This signal is better used with other supporting signals to confirm a valid entry point.

Unlike other indicators such as the RSI and stochastic oscillator, the MACD does not oscillate between values of 0 and 100, but rather reflects the extent of divergence or convergence between the two moving averages it uses.

The picture below shows the MACD indicator below the chart. The MACD 9-period moving average is shown in red. 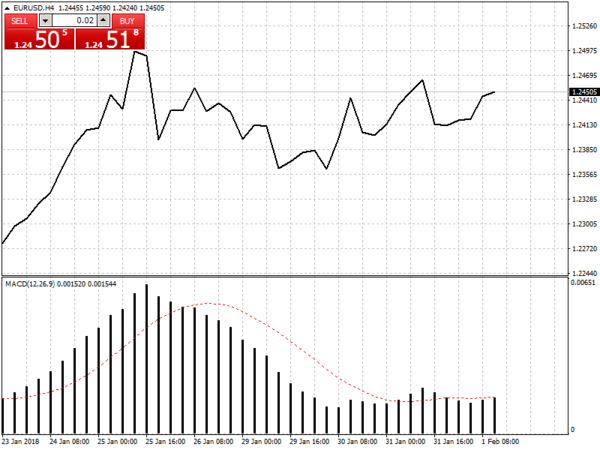 Below is an example of a MACD crossover with its 9-period moving to the downside. Notice how the the bars started declining below the red line. The price then continued downwards. 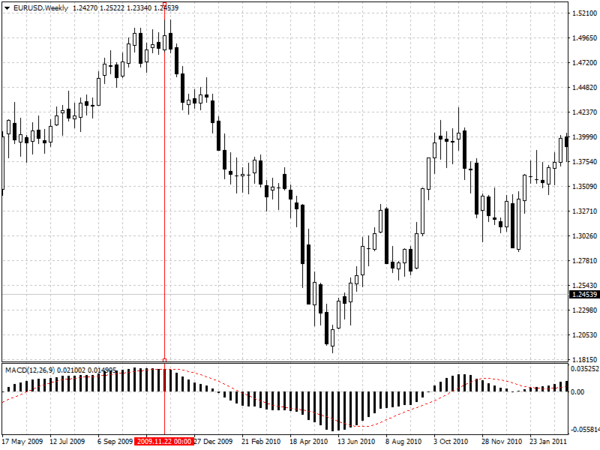 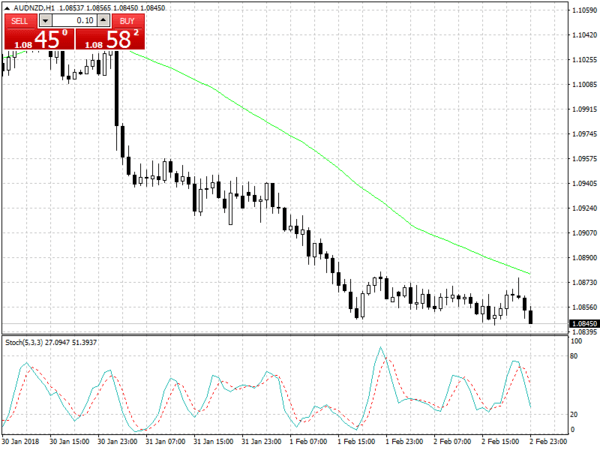 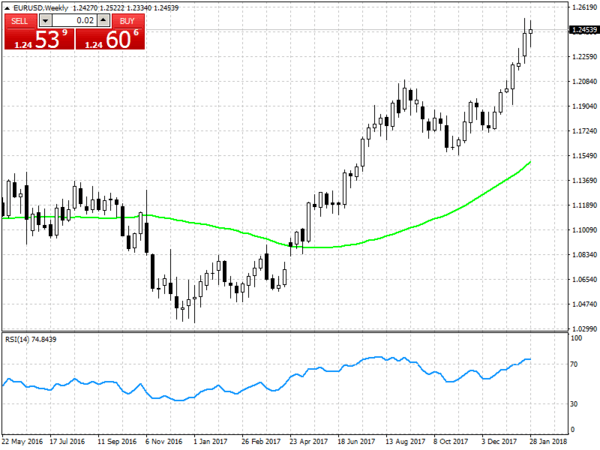 Bollinger bands are simply lines representing a certain number of standard deviations (usually 2 standard deviations), combined with a moving average line between them. When the price goes above the upper band and closes above it with at least 2 candles or more, it shows extreme buying. When the market goes below the lower band and closes below it with at least two candles or more it shows extreme selling. 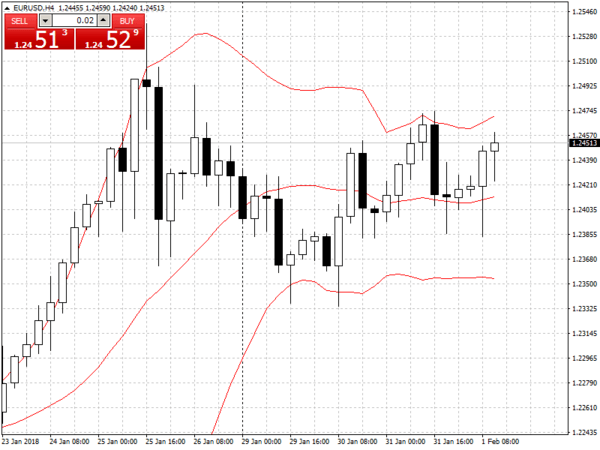 The Fibonacci sequence is a famous sequence in mathematics, and the most important percentages are derived from that sequence. Those percentages are: 23.6%, 38.2%, 50%, 61.8%, 100%. Experienced traders usually use those percentages to identify price level in the market at which the price is expected to resume its trend after a retracement.

Most charting software comes equipped with tools to identify those levels easily.

Trend lines are similar to resistance and support lines, however, they are not strictly horizontal in nature. A trader can easily draw a trend line by connecting three market bottoms together (or three tops) together with a straight line that touches those points. Those lines are useful when we want to identify when the price has broken out of a trend and has a started a movement in the opposite direction.

Channels are simply two trend lines that are paralleled with one another. They include a lower trend line and an upper trend line. The price usually oscillates within the channel before it eventually breaks out in a certain direction. The breakout direction is often similar to the direction of the price before entering the channel, as you can see below.

The price often moves in recognizable patterns, and usually, the price tends to have a certain behavior after displaying each of those patterns, which makes it easier to predict its movement.

Among the most well-known chart patterns are Rectangles, Triangles, Flags, Head And Shoulders, and Cup With Handle.

A Rectangle price pattern takes place when the price enters into a channel. The price usually breaks out in the same direction it entered.

A triangle is another price pattern where the price moves in a shape of declining tops and rising bottoms, showing decreased volatility. The price usually then breaks out in the same direction as its previous movement.

The flag pattern happens when the price declines slowly forming a flag shape, then it usually breaks out in the same direction as the previous direction.

The cup with handle is a trend continuation pattern. The price declines in the form of a cup then it forms a handle. Afterwards, it is likely to continue the pattern. 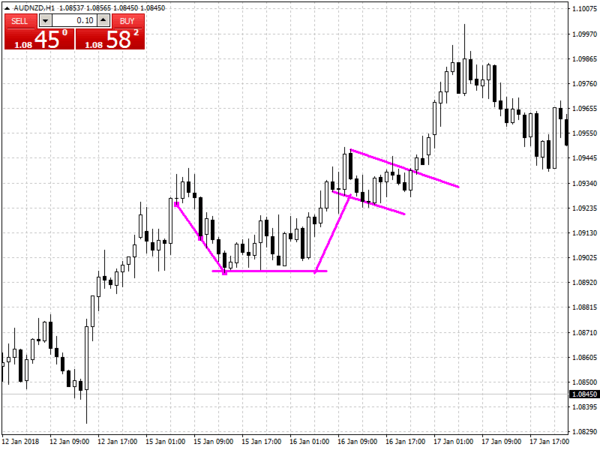