The three variants of AES are based on different key sizes (128, 192, and 256 bits). In this article, we will focus on the 128-bit version of the AES key schedule, which provides sufficient background to understand the 192 and 256 bit variants as well. At the end, we’ll include a note the other variants, and how they differ from the 128-bit version.

The encryption phase of AES can be broken into three phases: the initial round, the main rounds, and the final round. All of the phases use the same sub-operations in different combinations as follows: 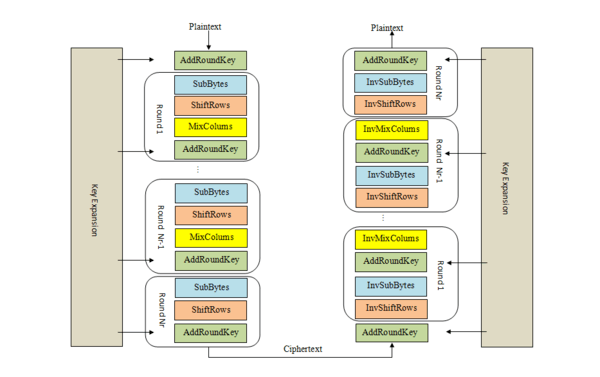 Overall structure of encryption and decryption in Advanced Encryption Standard

The four sub-operations of AES are AddRoundKey, SubBytes, ShiftRows, and MixColumns. These are explained in more detail in the following subsections.

The AddRoundKey operation is the only phase of AES encryption that directly operates on the AES round key. In this operation, the input to the round is exclusive-ored with the round key.

The SubBytes phase of AES involves splitting the input into bytes and passing each through a Substitution Box or S-Box. Unlike DES, AES uses the same S-Box for all bytes. The AES S-Box implements inverse multiplication in Galois Field 28. The AES S-Box is shown in the Table below. 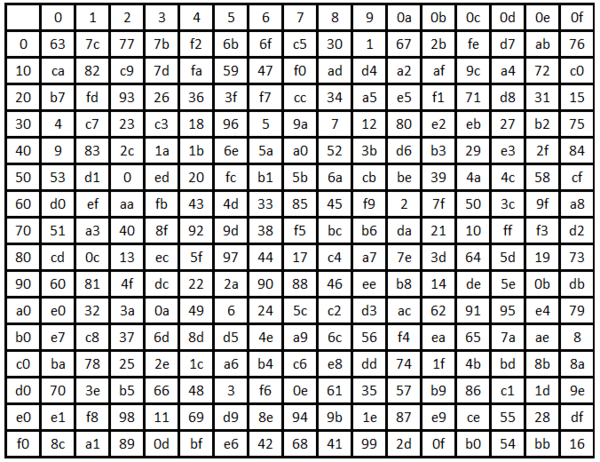 To read this Table, the byte input is broken into two 4-bit halves. The first half determines the row and the second half determines the column. For example, the S-Box transformation of 35 or 0x23 can be found in the cell at the intersection of the row labeled 20 and the column labeled 03. Therefore decimal 35 becomes 0x26 or decimal 38.

In the ShiftRows operation, each of these rows is shifted to the left by a set amount: their row number starting with zero. The top row is not shifted at all, the next row is shifted by one and so on. This is illustrated in the Figure below.

In the Figure, the first number in each cell refers to the row number and the second refers to the column. The topmost row (row 0) does not shift at all, row 1 shifts left by one, and so on.

Like the ShiftRows phase of AES, the MixColumns phase provides diffusion by mixing the input around. Unlike ShiftRows, MixColumns performs operations splitting the matrix by columns instead of rows. 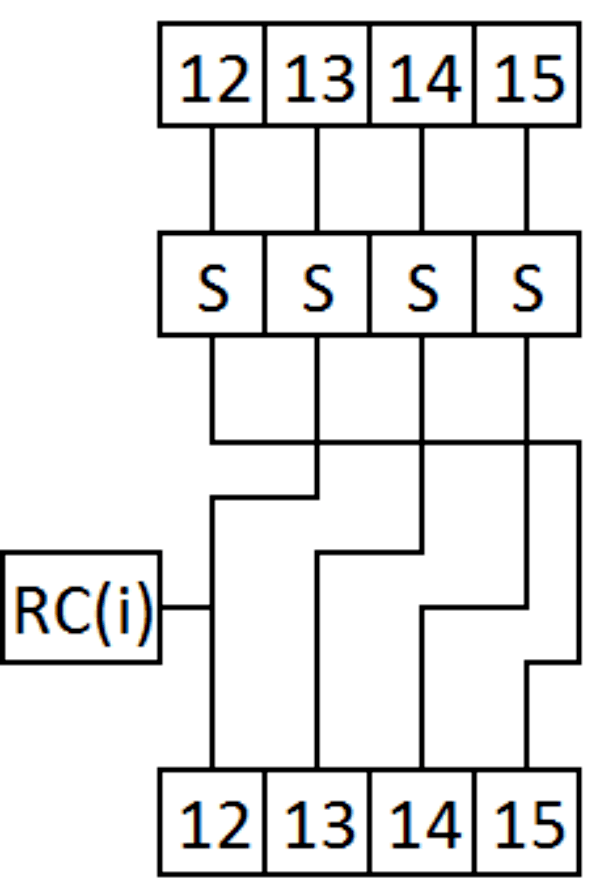 The g function of the AES key schedule is illustrated in the Figure above. As shown, the operation consists of three stages: an S-Box transformation, a permutation, and an exclusive-or. The S-Box operation used in the AES key schedule is identical to the one used in the encryption phase as described previously. In the permutation phase of the g function, each byte of the word is shifted one position to the left. Finally, the leftmost byte is exclusive-ored with a round constant. The rounds constants in AES are the value of 2round_number modulo Galois Field 28.

The output of the key schedule function is used as the round key input to the AddRoundKey operation in AES encryption. An identical transformation on the round key is performed to produce the next round key.

To decrypt an AES-encrypted ciphertext, it is necessary to undo each stage of the encryption operation in the reverse order in which they were applied. The three stage of decryption are as follows:

Of the four operations in AES encryption, only the AddRoundKey operation is its own inverse (since it is an exclusive-or). To undo AddRoundKey, it is only necessary to expand the entire AES key schedule (identically to encryption) and then use the appropriate key in the exclusive-or.

The next operation to be undone is the SubBytes operation. The Inverse S-Box is shown in the Table below. It is read identically to the S-Box matrix. 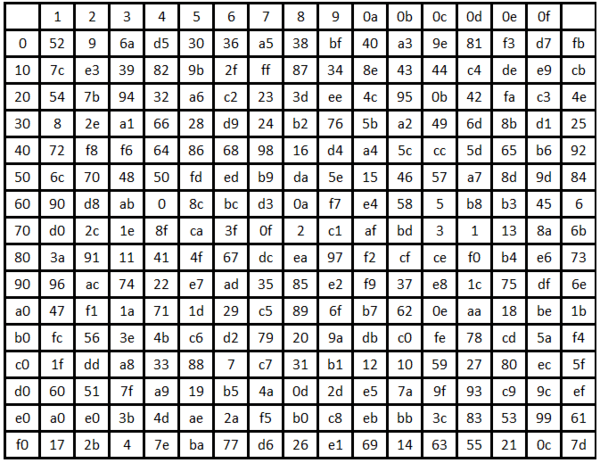 The last inverse operation to define is MixColumns. Like MixColumns, Inverse MixColumns can be defined as the matrix multiplication in Galois Field 28. This is illustrated in the Figure below.

The reason why this multiplication inverts the initial operation is because of how math works in the Galois Field 28, which we won’t describe in detail in this tutorial. However, note that the specific values in both matrices are chosen in a way such that one multiplication is the inverse of the other in Galois Field 28.

AES ciphertexts are decrypted by following the order of operations explained at the beginning of this section, using the appropriate inverse operations and using round keys in reverse order.

There are three variants of AES based on different key sizes (128, 192, and 256 bits). Above we described the 128-bit version of the AES key schedule.

All three variants of AES use a 128-bit block size, only the key sizes differ. The overall structure of the encryption stage of AES is identical for all three variants, but the number of rounds varies for the 128, 192, and 256-bit variants (10, 12, and 14 rounds respectively). The key schedule is different for each variant.

One of the primary advantages of AES is its ubiquity. Since it is defined as the standard used by the US government, it is supported by most vendors. Also, it is relatively fast in both hardware and software.

The three possible key lengths supported by AES allow users to pick a tradeoff between speed and security. Increased key length increases the execution time of both encryption and decryption. At this time, all three key lengths are considered secure and the best known attacks against AES reduce effective key length by at most three bits.

AES uses a single S-Box for all bytes in all rounds. In contrast, DES uses eight distinct S-Boxes, which increases implementation requirements.