It can be exciting to earn money and have a source of income. You learn quickly that having an income to support yourself gives you confidence and freedom. When you earn money, you can participate in society and your local community by paying taxes. While most of us hate the sound of paying taxes, we need to remember it allows us to live in a prosperous nation and local community. Understanding the U.S. tax system will help you budget your take-home pay, so we’ll begin by understanding the basics.

Let’s start with an explanation of the type of tax system used in the United States and how to calculate federal and state taxes. The U.S. uses a progressive tax system, which means that the more income you make, the more you pay in taxes. Taxes due are calculated based on percentages, called tax brackets. The system believes that people who make the most should pay more tax.

The latest tax reform is called the Tax Cuts and Jobs Act (TCJA), and it changed the tax rates for 2018. Here are the newly assigned rates for federal taxes for different taxpayers:

*To file as head of household, you must pay for more than half of the household expenses, be considered unmarried for the tax year, and you must have a qualifying child or dependent.

Here are the rates for filing your 2017 taxes this year:

Here’s an example of how to use the above tables: If earned income from all sources equals $50,000 for an unmarried individual for the 2018 tax year then:

The sum of those rates are totaled to equal the total federal tax due:

One result of getting married is the option to file taxes jointly with a spouse each year. If the impact of combining incomes puts the couple’s earned income into a higher tax bracket, they are liable for more taxes due. We call this the marriage penalty, which is an unintentional result of the older U.S. tax code. The penalty occurred for spouses who make similar incomes and did not result when their incomes were drastically different.

With the newest tax reform resulting in new tax brackets, the marriage penalty is removed, except for couples making over $600,000[1] every year. An accountant could help a couple determine if it is best to file separately or jointly.

People can reduce their taxable income by taking what are called deductions. These are items that can be subtracted from your earned income before applying the tax rates shown in the tables above. If someone does not have a lot of expenses related to work or personal property, the government allows them to deduct a “standard” amount. In 2017 the standard deductions are as follows:

As an example, we’ll continue to use our $50,000 annual income as mentioned above. If we made$50,000 from our wages in 2017, had no expenses related to school, medical, a home or a business, and had other income to claim we would use an adjusted income of $50,000 less our standard deduction to further calculate our tax owed.

There are some rules which would keep people from using the standard deduction. See the IRS website for more details.

If someone has a lot of expenses which exceed their standard deduction, then they are likely to elect to itemize their deductions instead, to further reduce their taxable income. The U.S. tax law allows for certain items to be deductible. Examples include, but are not limited to:

More details are covered here on the IRS website. Some deductions will be reduced if your income exceeds defined amounts.

Once all income is accounted for, and tax liability is calculated based on the tax brackets, then a tax credit may be applied. A credit is different than a deduction because it does not reduce the income level of a taxpayer, but instead, it reduced the tax liability. Here are some examples of tax credits allowed:

There are other sources of income besides income related to a job. The income listed below are taxable:

The income listed below are NOT taxed when received:

Capital gains are profits made on an investment. When we hold taxable investment accounts, we are paying taxes on income earned off those investments and any gains or growth made on the initial investment amount. If we hold our investments in an education or retirement account that is tax-deferred, like a 401(k), IRA or 529 Plan, then we don’t pay taxes on the earnings or income until a future date.

Taxes on gains or growth of an investment in addition to dividends paid from traditional securities like stocks are taxed at capital gains tax rates. A capital gain is considered short-term if the investment was purchased and sold within 12 months. These gains are taxed at ordinary income rates. When an investment is held longer than 12 months, then it is considered a long-term capital gain, and it is taxed at rates less than ordinary income. These rates are dependent on income level. 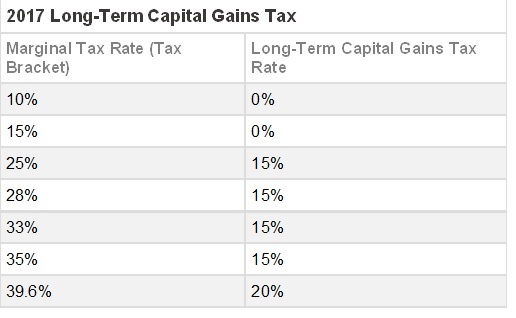 The $2,500 long-term capital gains tax is added to my total tax liability for the year.

Let’s assume I made $2,000 in interest from a 10 year Treasury Bond in 2017 and my earned income is$50,000. My total taxable income becomes $52,000 because I must include the bond’s interest payments as ordinary taxable income.

When dividends are earned from investments like stocks they are taxed as capital gains and are considered qualified dividends. Dividends are typically paid by a stock monthly or quarterly and are a distribution of the underlying company’s earnings. They are not guaranteed.

Dividends may no longer be considered “qualified” (for the capital gains tax treatment) if they are held less than 60 days after the corporation’s board declares a dividend payment. If held less than the 60-day treatment the dividend is taxed at ordinary income tax rates.

Individuals who have access to special tax loopholes were targets of a supplemental income tax called the alternative minimum tax or AMT, in addition to a baseline tax. The AMT was designed, so that wealthy individuals did not escape paying their fair share of taxes.

AMT is due if it is higher than the regular tax because several deductions are not allowed. If income is greater than those listed in the table below, it is possible to be subject to AMT.

To determine if an individual is subject to AMT see the IRS form 6251 found here. Entities or individuals who can claim general business credit, the qualified electric vehicle credit, the personal use part of the alternative fuel vehicle refueling property credit, or the credit for prior year minimum tax should file form 6251. If your income is above the income levels in the table above you should complete form 6251 to see if you are subject to AMT. A tax professional is helpful if you suspect AMT applies to you.

Estate tax is the tax you owe before property can be transferred at your death. Fair market value is assigned to all property, deductions may be allowed for debts or administrative expenses to reduce the value, and if the ending value is greater than $5,490,000, then an estate tax filing is required. In 2018 the threshold increases to$10,000,000.

A gift tax may be applied to any gift of property from your estate in a given year. A person may “gift” up to $14,000 per year to any number of people without a gift tax. If you exceed the$14,000 gift that excess is applied to your lifetime max of $10,000,000. Let’s use an example to make this more clear:

The exclusions allow you to avoid estate taxes on your property. Anyone who has this amount of money to gift should be working with a tax professional to avoid any unnecessary taxes.

The estate tax is a common point of controversy in politics because it is seen as an additional way to tax the wealthy.

It is the right of each state within the United States if they want to require a state income tax on its residents. State income tax is in addition to federal income taxes described above. States use this tax collection as another source of revenue to fund its government programs. Not all states impose an income tax. The below are states that do not:

A state can decide what system it wants to use to calculate taxes due. A progressive or flat tax system may be used as well as allowable deductions and credits. Besides income taxes, states and local governments collect property taxes, motor related taxes, and sales taxes as additional sources of revenue.

Property taxes are applied by local governments, such as counties or cities. The are a tax paid based on the value of property, like your home. The tax rate is assigned by the local taxing authority. Property taxes typically provide community services such as schools, libraries, or first responder services as examples.

The individual lives in Colorado, which imposes a flat state income tax rate of 4.63% would be calculated by using your household income and multiplying it by the flat tax rate of 4.63%. This would cause you to pay a tax of $2,315 for the year to the state of Colorado.

California imposes a progressive tax similar to the federal government so the $50,000 income would be taxed in brackets.

To file federal and state income taxes, there are particular forms used to collect information that is then submitted to the taxing authority. Form 1040 and 1040EZ are the most well-known tax forms used by taxpayers. The IRS filing forms have line items to account for all types of income, deductions, and credits a taxpayer may have. It is relatively simple to get free or inexpensive software to help a taxpayer complete the required tax forms and file electronically when using a 1040A or 1040EZ form. Many taxpayers opt for tax filing with the help of a tax professional when using a form 1040.

A W-2 is used to complete the applicable filing forms. A W-2 is issued by an employer to an employee; independent contractors receive a 1099 instead. The W-2 lists all compensation earned in the tax year, federal taxes withheld from the year’s paychecks, social security taxes withheld, medicare taxes withheld, and details about employee benefits received or contributed by the employee for the year. The IRS tax forms will refer to the information boxes on form W-2 so a taxpayer knows exactly what information is needed. Taxpayers will need to submit copies of their form W-2 along with their IRS filing form.

Taxpayers who make less than $100,000, don’t have dependents, do not itemize deductions, and who are individuals or married filing jointly can file using the simplest form, 1040EZ. This form can be completed easily and by hand without the help of a professional.

1040A is for those who still have less than $100,000 in income but may have children and still don’t itemize deductions. 1040A is considered a short-form and easy to file for most taxpayers. The form will include more types of income, deductions and credits compared to the EZ form.

Form 1040 taxpayers have more complex situations. Income is typically higher than $100,000, they usually itemize deductions for a number of reasons, they may have children or businesses. Additional tax forms are required to be attached to the Form 1040 when a taxpayer itemizes, has self employment income, and has special income sources.

Taxes are required to be filed with the IRS before April 15th of each year for taxes due based on the previous year’s income and expenses. Employers will collect federal and state income tax from employee paychecks unless they are classified as independent contractors. Ask your employer if you are unsure. Collecting taxes through automatic payroll deduction helps individuals save for taxes due at the end of the year.