Investment in the stock market is not always an easy journey. It is risky by nature. Markets are largely unpredictable even to senior analysts and can make a turn at any moment in the opposite direction. Many analysts describe the markets as random. Because of this randomness, there is no single investment strategy that works every time. However, different strategies can expose you to different levels of risk.

Risk is the probability that an adverse event happens (implying negative impact). Two key elements are particularly important in this definition.

First, the probability — adverse events may or may not occur.

Second, impact — the adverse event has a negative impact, mostly in terms of financial losses in the stock market.

Usually, those two elements (probability and impact) define how severe the risk is. This risk is quantified in a measure known as a risk score. This score is calculated by multiplying the mathematical probability of the risk by the negative impact. Investors should give more attention to risks with higher scores since they are more serious.

Typically, an adverse event affects the value of your investment negatively. Investors often have financial goals to achieve, and any event that can affect their ability to achieve those goals is usually considered a risk.

Most Common Types of Risks

The value of your investment may fluctuate based on the price’s movement up and down. Typically, this risk is associated with equities since their value can fluctuate. For example, if the investor bought a share of Amazon at $100, expecting its price to go up. The market risk here is that the price declines significantly to below$70 for example. Fixed income securities are not affected by this risk unless the investor wants to sell his bonds, since the interest rate on fixed income assets will remain the same regardless of the price of the bond.

The monetary value of your investments may fluctuate based on the level of inflation.

The risk of inflation is relevant when the investor is holding cash money (she has not invested yet), which means he has lost purchasing power due to inflation. For this reason, holding cash is not necessarily a risk-free activity. The risk of inflation also has an effect on the value of debt. Typically, inflation is negative for the lender since he will receive less purchasing power when his loan is repaid. For example, if you can purchase as asset for $100 today but after one year you require$120 to purchase it, then this is case where the money lost a part of its purchasing power.

Bond holders should be aware of the solvency of the money borrowers. Sometimes governments or bond issuers have cash flow problems or weak revenues which lead to their inability to pay back their debt. This is more common with private companies or entities than with governments. For example, if you lent $1000 to a corporation but then the company filed for bankruptcies, it becomes doubtful that you will receive back your money.

Solvency is the ability of an entity to meet its financial obligations, such as debt, in due time.

This risk is more applicable to exporters, importers, and investments abroad. Fluctuations in the exchange rate can affect the value of revenues in the main currency. This risk is heightened with investments in which there is considerable time between buying goods and selling them. Furthermore, this risk is of concern to investors who want to purchase (or sell) assets that are denominated in foreign currency. Exchange rate risk is also applicable when you are investing in foreign currencies.

For example, suppose you bought $100 for 800 NOK, but then needed to switch back to NOK, and now, the$100 is only able to get you 750 NOK. This is risk of a decline in the exchange rate due to the decline in the value of the USD against the Norwegian krone.

This is the risk of not being able to find a buyer for your asset at the price you which you want to sell it. Market makers usually provide liquidity in some markets. However, when markets are illiquid market makers charge higher spreads to compensate for their activities. For example, let us assume you bought a stock for $200 and then the price increased up to$250, but you could not find a buyer at this price therefore you had to sell it at $240, which is an example of a liquidity risk.

This is a major risk that can affect the entire financial system rather than a single asset alone. The most famous example is the financial crisis in 2008. This crisis was followed by the great recession as well as a credit crisis. Previous accounts of such crises were more severe, such as the great depression of 1929. This type of risk is major enough to warrant a government intervention to control damages and restore economic growth.

This has implications on how much you can earn on your deposits in the bank. It also applies to bonds since the interest rate can also fluctuate based on economic and geopolitical conditions. Example: you have a deposit in the amount of 50,000 USD in the bank, at an interest rate of 2%, but then the interest rate declines to 1% which reduces your earnings.

This is the risk that a government will not be able to pay its obligations such as debt in due time. This risk also includes the risk that a central bank will change their regulations regarding foreign exchange affecting the value of its currency.

For example, when the Swiss National Bank unpegged the exchange rate between the franc and the euro, the value of the euro dramatically decreased against the Swiss Franc.

The standard deviation is one of the most popular measures of risk. It measures how much the price can deviate from its average. In other words, it measures the volatility of the price movement. Volatility makes prediction much harder, and therefore it might lead to losses due to poor reading or understanding of the market.

The standard deviation measures deviation from a central measure, and thus the higher its reading the more volatile the market is. Investors may seek to implement a mean reversion strategy when the standard deviation is too high. However, this strategy is not always safe to use as typically trending markets are characterized by long periods of price staying above average.

The mean reversion strategy is a strategy where investors assume that overstretched movements in the markets (long upward or downward trends) will be reversed, and that the price will eventually return to its mean value.

In the below graph the number in the center (μ) is the average whereas the σ symbol refers to the standard deviation.

The vertical axis is the data values. There are more data points as we come closer to the average in the normal distribution. 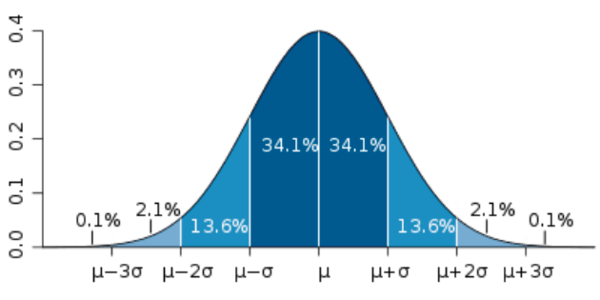 Beta is another measure of the volatility of the market. However, it measures a stock’s volatility in comparison with that of the market. In simple terms, Beta tells the investors whether a certain stock is historically less or more volatile in its movements than the overall market, helping the investor decide whether this is the right level of volatility for him. Beta is usually calculated by using regression analysis.

For example, Amazon stock has a beta of 1.75, therefore it is 75% more volatile than the overall market.