Natural language processing (NLP) is all about creating systems that process or “understand” language in order to perform certain tasks. These tasks could include

The traditional approach to NLP involved a lot of domain knowledge of linguistics itself. Understanding terms such as phonemes and morphemes were pretty standard as there are whole linguistic classes dedicated to their study. Let’s look at how traditional NLP would try to understand the following word.

Let’s say our goal is to gather some information about this word (characterize its sentiment, find its definition, etc). Using our domain knowledge of language, we can break up this word into 3 parts.

We understand that the prefix “un” indicates an opposing or opposite idea and we know that “ed” can specify the time period (past tense) of the word. By recognizing the meaning of the stem word “interest”, we can easily deduce the definition and sentiment of the whole word. Seems pretty simple right? However, when you consider all the different prefixes and suffixes in the English language, it would take a very skilled linguist to understand all the possible combinations and meanings. 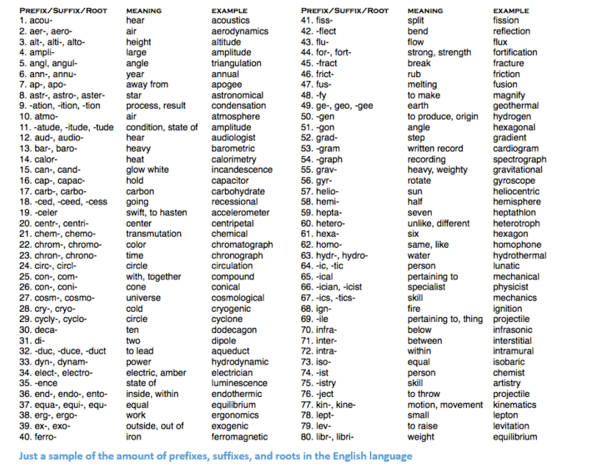 How Deep Learning Fits In

Deep learning, at its most basic level, is all about representation learning. With CNNs, we see the composition of different filters that are used to classify objects into categories. Here, we’re going to take a similar approach with creating representations of words through large datasets.

Overview of This Tutorial

This post will be structured in a way where we’ll go through the basic building blocks of building deep networks for NLP and then go into talking about some applications in the next tutorial. It’ll feel normal to not exactly know why we’re using RNNs or why an LSTM is helpful, but hopefully by the end of the application section, you’ll have a better sense of why deep learning techniques have helped NLP so much.

Since deep learning loves math, we’re going to represent each word as a d-dimensional vector. Let’s use d = 6.

Now let’s think about how to fill in the values. We want the values to be filled in such a way that the vector somehow represents the word and its context, meaning, or semantics. One method is to create a co-occurence matrix. Let’s say that we have the following sentence.

From this sentence, we want to create a word vector for each unique word. 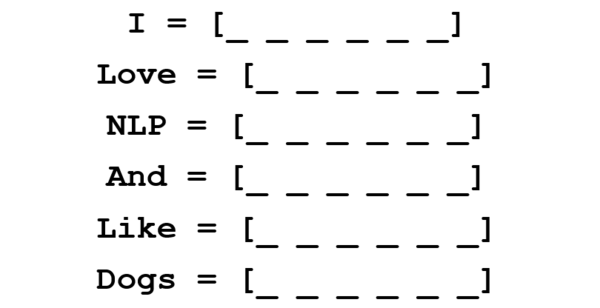 A coocurence matrix is a matrix that contains the number of counts of each word appearing next to all the other words in the corpus (or training set). Let’s visualize this matrix.

Extracting the rows from this matrix can give us a simple initialization of our word vectors. 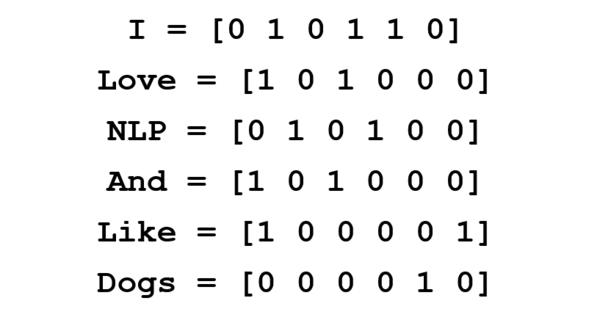 Notice that through this simple matrix, we’re able to gain pretty useful insights. For example, notice that the words ‘love’ and ‘like’ both contain 1’s for their counts with nouns (NLP and dogs). They also have 1’s for the count with “I”, thus indicating that the words must be some sort of verb. With a larger dataset than just one sentence, you can imagine that this similarity will become more clear as ‘like’, ‘love’, and other synonyms will begin to have similar word vectors, because of the fact that they are used in similar contexts.

Now, although this a great starting point, we notice that the dimensionality of each word will increase linearly with the size of the corpus. If we had a million words (not really a lot in NLP standards), we’d have a million by million sized matrix which would be extremely sparse (lots of 0’s). Definitely not the best in terms of storage efficiency. There have been numerous advancements in finding the most optimal ways to represent these word vectors. The most famous of which is Word2Vec.

The basic idea behind word vector initialization techniques is that we want to store as much information as we can in this word vector while still keeping the dimensionality at a manageable scale (25 – 1000 dimensions is ideal). Word2Vec operates on the idea that we want to predict the surrounding words of every word. Let’s take our previous sentence “I love NLP and I like dogs”. We’re going to look at the first 3 words of this sentence. 3 is, thus, going to be our window size m.

Now, our goal is to take the center word, ‘love’, and predict the words that come before and after it. How do we do this? By maximizing/optimizing a function of course! Formally, our function seeks to maximize the log probability of any context word, wt+j given the current center word, wt

Let’s dig deeper into this. The above cost function is basically saying that we’re going to add the log probabilities of ‘I’ and ‘love’ as well as ‘NLP’ and ‘love’ (where ‘love’ is the center word in both cases). The variable T represents the number of training sentences. Let’s look closer at that log probability.

vc is the word vector of the center word. Every word has two vector representations (uo and uw), one for when the word is used as the center word and one for when it is used as the outer word. The vectors are trained with stochastic gradient descent. This is definitely one of the more confusing equations to understand, so if you’re still having trouble visualizing what’s happening, you can go here and here for additional resources.

One Sentence Summary: Word2Vec seeks to find vector representations of different words by maximizing the log probability of context words given a center word and modifying the vectors through SGD.

(Optional: The authors of the paper then go into more detail about how negative sampling and subsampling of frequent words can be used to get more precise word vectors.)

Arguably, the most interesting contribution of Word2Vec was the appearance of linear relationships between different word vectors. After training, the word vectors seemed to capture different grammatical and semantic concepts.

It’s pretty incredible how these linear relationships could be formed through a simple objective function and optimization technique.

Now that we have our word vectors, let’s see how they fit into recurrent neural networks. RNNs are the go-to for most NLP tasks today. The big advantage of the RNN is that it is able to effectively use data from previous time steps. This is what a small piece of an RNN looks like.

To get the output (ŷ) of a particular module, this will be h times WS, which is another weight matrix.

Let’s take a step back now and understand what the advantages of an RNN are. The most distinct difference from a traditional NN is that an RNN takes in a sequence of inputs (words in our case). You can contrast this to a typical CNN where you’d have just a singular image as input. With an RNN, however, the input can be anywhere from a short sentence to a 5 paragraph essay. Additionally, the order of inputs in this sequence can largely affect how the weight matrices and hidden state vectors change during training. The hidden states, after training, will hopefully capture the information from the past (the previous time steps).

Let’s now look at a gated recurrent unit, or GRU. The purpose of this unit is to provide a more complex way of computing our hidden state vectors in RNNs. This approach will allow us to keep information that captures long distance dependencies. Let’s imagine why long term dependencies would be a problem in the traditional RNN setup. During backpropagation, the error will flow through the RNN, going from the latest time step to the earliest one. If the initial gradient is a small number (say < 0.25), then by the 3rd or 4th module, the gradient will have practically vanished (chain rule multiplies gradients together) and thus the hidden states of the earlier time steps won’t get updated.

In a traditional RNN, the hidden state vector is computed through this formulation.

The GRU provides a different way of computing this hidden state vector h(t). The computation is broken up into 3 components, an update gate, a reset gate, and a new memory container. The two gates are both functions of the input word vector and the hidden state at the previous time step.

The key difference is that different weights are used for each gate. This is indicated by the differing superscripts. The update gate uses Wz and Uz while the reset gate uses Wr and Ur.

Now, the new memory container is computed through the following.

Now, if you take a closer look at the formulation, you’ll see that if the reset gate unit is close to 0, then that whole term becomes 0 as well, thus ignoring the information in ht-1 from the previous time steps. In this scenario, the unit is only a function of the new word vector xt.

The final formulation of h(t) is written as

A common example to illustrate the effectiveness of GRUs is the following. Let’s say you have the following passage.

and the associated question “What is the sum of the 2 numbers?”. Since the middle sentence has absolutely no impact on the question at hand, the reset and update gates will allow the network to “forget” the middle sentence in some sense, and learn that only specific information (numbers in this case) should modify the hidden state.

If you’re comfortable with GRUs, then LSTMs won’t be too far of a leap forward. An LSTM is also made up of a series of gates.

Definitely a lot more information to take in. Since this can be thought of as an extension to the idea behind a GRU, we won’t go too far into the analysis, but for a more in-depth walkthrough of each gate and each piece of computation, check out Chris Olah’s amazingly well written blog post. It is by far, the most popular tutorial on LSTMs, and will definitely help those of you looking for more intuition as to why and how these units work so well.

Comparing and Contrasting LSTMs and GRUs

Let’s start off with the similarities. Both of these units have the special function of being able to keep long term dependencies between words in a sequence. Long term dependencies refer to situations where two words or phrases may occur at very different time steps, but the relationship between them is still critical to solving the end goal. LSTMs and GRUs are able to capture these dependencies through gates that can ignore or keep certain information in the sequence.

The difference between the two units lies in the number of gates that they have (GRU – 2, LSTM – 3). This affects the number of nonlinearities the input passes through and ultimately affects the overall computation. The GRU also doesn’t have the same memory cell (ct) that the LSTM has.

There are a couple other deep models that are useful in NLP. Recursive neural networks and Convolutional Neural Networks (CNNs) for NLP are sometimes used in practice, but aren’t as prevalent as Recurrent Neural Networks (RNNs), which really are the backbone behind most deep learning NLP systems.

In the next tutorial, Sequence to Sequence Learning with Neural Networks, we’ll see how an 8-layer LSTM network produced state-of-the-art results in language translation.