In this hands-on assignment, we’ll use the matplotlib python library to visualize a dataset. The dataset we’ll be using is a medical dataset with information about some patients on metrics like glucose, insulin levels, and other metrics related to diabetes. The assignment will serve two primary objectives - (a) practice matplotlib on a realistic task, and (b) learn how one can visualize and present a dataset.

To get started, first download the dataset from this link: diabetes.csv. Open the file in your favorite text editor and have a look.

First, we’ll import numpy, pandas and matplotlib. Then, we’ll load the dataset, clean it, and also create a normalized dataset.

First, we’ll create a bar plot to compare the values each feature takes depending on whether or not the person has diabetes.

The result should look like the following. (In this entire tutorial, green = non-diabetic (= safe and red = diabetic (= danger)). 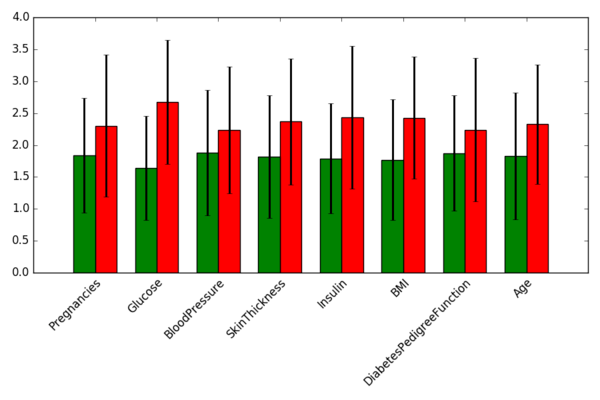 The main conclusions we can draw from the plot is that although a lot of variables are indicators for diabetic vs non-diabetic, none of them is a clear indicator. This is because there is significant overlap within 1 standard deviation among the two classes of people.

Task 2: Histogram for each feature

Although the barplots gave us a rough idea of what each feature looks like, we’d like take a deeper look at each feature’s distribution among diabetic and non-diabetic folks.

Our goal is to create histograms that look similar to the following. 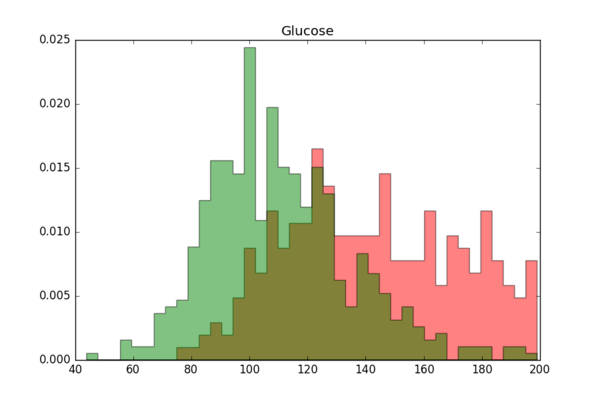 You may recall from the Pandas assignment that some pairs of features are highly correlated. Let’s draw scatterplots for these pairs of variables and see what the plots look like. 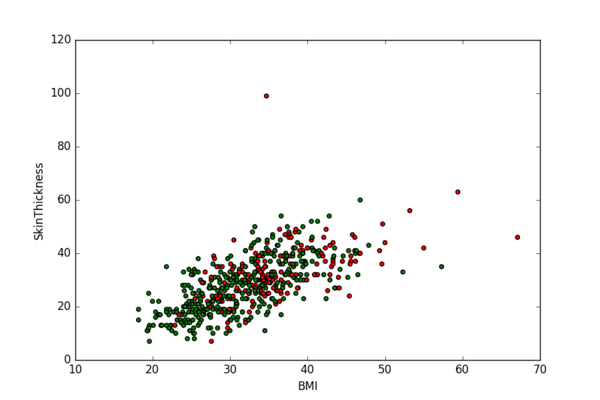 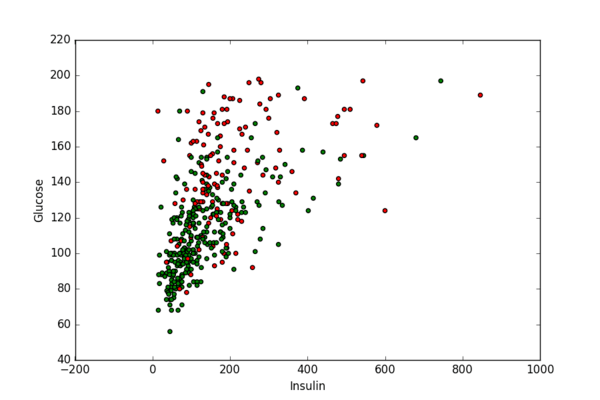 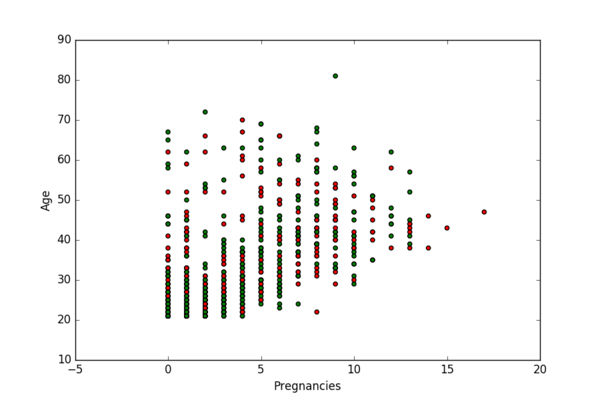 BMI vs SkinThickness is the cleanest plot out of the three. It has a nice Gaussian distribution.

Glucose vs Insulin is also kind of clean, but notice that the values are much more densely packed towards the lower region, and more spread out for the higher values.

Pregnancies vs Age is the most ‘dirty’ plot of the three, mostly because pregnancies takes a small number of discrete values.

Create scatter plots for glucose vs each feature, similar to glucose vs insulin. And see which graph gives the best separation between the green and red data-points. The best feature will be the one that has the most information about the outcome, but isn’t very correlated with glucose.

In this final section, we’ll create a heatmap visualization of the pairwise correlations.

The following code can be used to create a heatmap. Go through the code and make sure you understand what’s going on in each line.

Use the above function to create a pairwise correlation visualization. The output should look like the following: 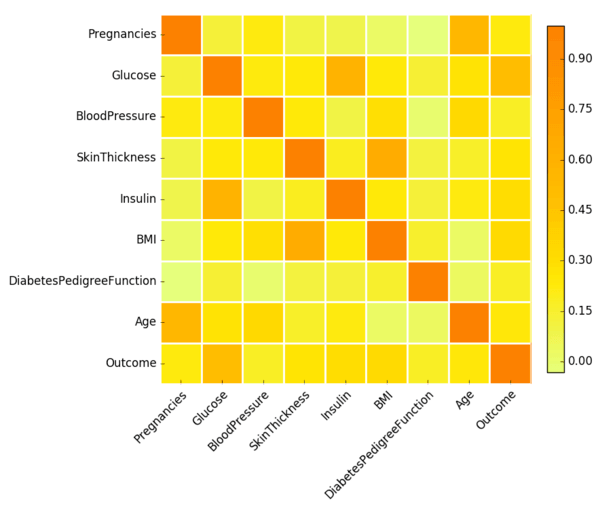 Visualization of pairwise correlations among features and outcome

If you came this far, good job! Data visualization is a very important skill for understanding large datasets and communicating results with others. Seeing it is the easiest way to understanding it. Kudos!

You can also play with this project directly in-browser via Google Colaboratory using the link above. Google Colab is a free tool that lets you run small Machine Learning experiments through your browser. You should read this 1 min tutorial if you’re unfamiliar with Google Colaboratory. Note that, for this project, you’ll have to upload the dataset to Google Colab after saving the notebook to your own system.