On 15 April, 1912 Titanic met with an unfortunate event - it collided with an iceberg and sank. The ship was carrying 2224 people and that tragic accident costed the life of 1502 passengers. 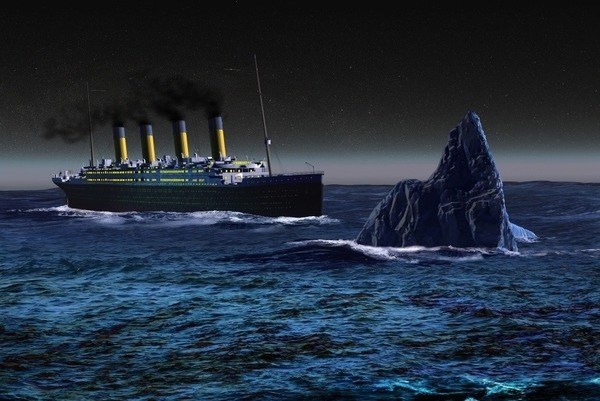 In this tutorial we will be predicting which passengers survived the accident and which couldn’t from different features like age, sex, class, etc. This problem is hosted by Kaggle as a challenge and data can be found here: Titanic: Machine Learning from Disaster. You will have to create a Kaggle account and accept the rules to download the data.

We will start by understanding what our data looks like and get its overview. For that we will use Pandas.

A few samples from our dataset (Click to enlarge)

The list of features included in the dataset for this problem are described below:

Let’s check to see if any of the features have missing values.

Now will get a general information about our data. We will find total number of data and data types of different features.

We can see from the data above, that Age and Cabin features have a lot of missing values. We can get more information about our data using describe function in pandas.

Everything above looks normal. Note that 38.3% of the passenger’s survived, the rest did not. The above approach doesn’t provide a good description for categorical data. We’ll use the following method to summarize those features:

Lets start by visualizing the number of people who survived and who failed. 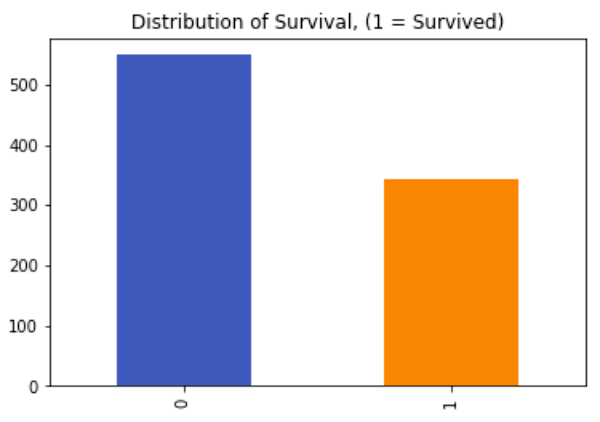 Barplot of Did Not Survive vs Survived

From the figure above, it is clear that fewer people were able to survive and more that 500 people died.

Next, let’s see how age and sex affected survival. 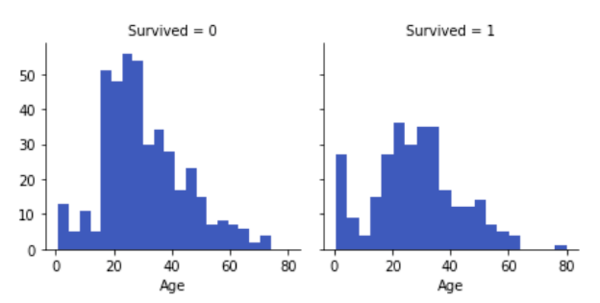 From the above figures, we can clearly see that survival and age has high correlation. We can see that many people from age group 25 to 30 died. Similarly, the death rate for people between age 50 to 65 was lower than the survival rate. We can also see that many more male passengers died in comparison to female passengers.

Next, lets look at how class affected the survival rates of passengers. 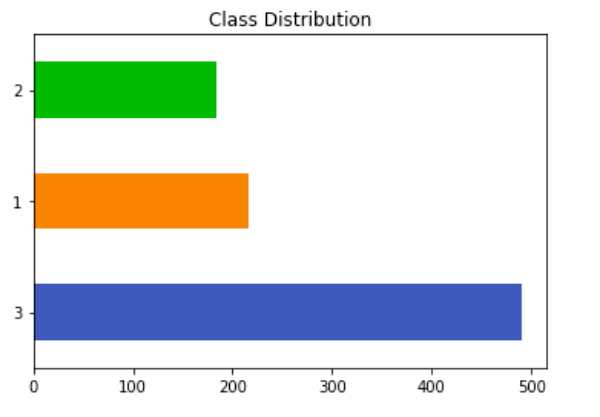 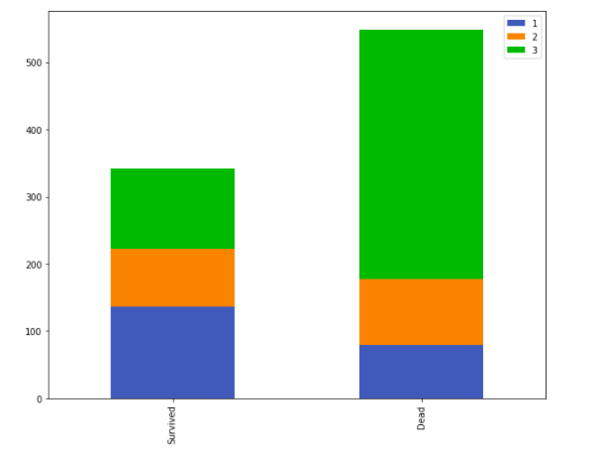 Stacked plot of Pclass vs Survived

From the above figure, we can infer that the death rate was not proportionally distributed among classes. We can clearly see that the people from first and second class had higher survival rate than those from third class.

Let’s do an analogous analysis based on the port from where people embarked. 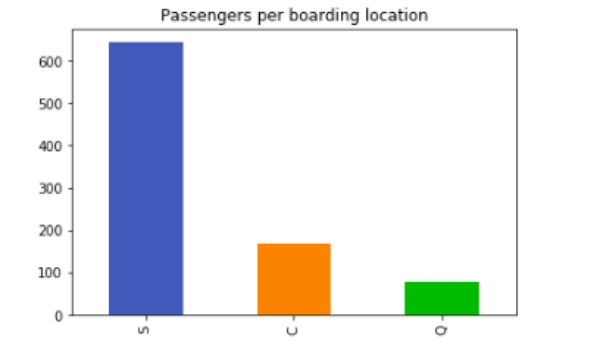 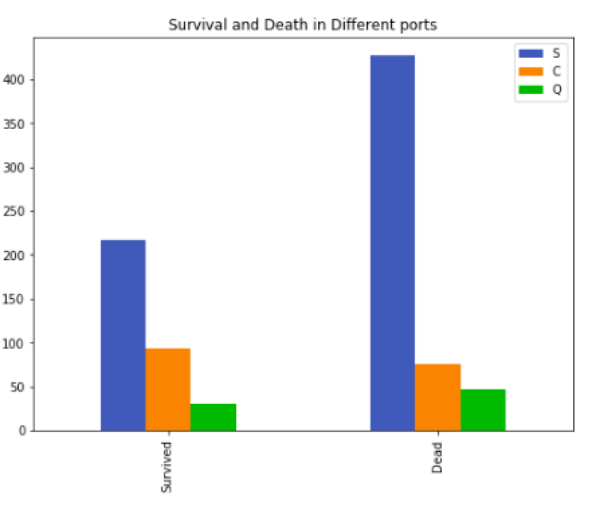 We can see that the survival was affected by the port from where they embarked.

Lastly, lets visualize the relation between ticket fare a passenger paid and how it affected their chance of survival. We plot the mean fare for two classes of Survived feature. 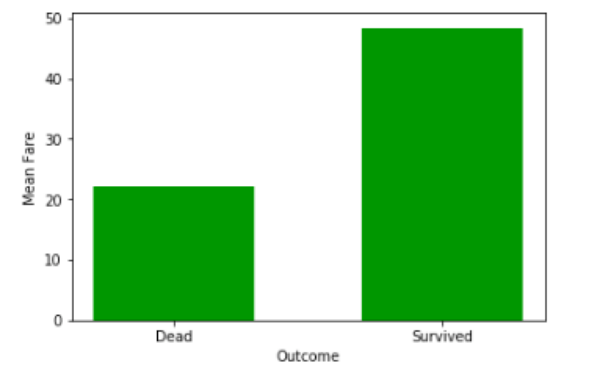 We can observe that higher fare paying passenger have better chance of survival.

Before moving onto data exploration, we’ll convert the categorical features in our dataset to integer variables. This will make things like calculating correlations easier, and will also convert data into a format easier to process for machine learning algorithms.

We first convert the values of Sex feature. We will map female to 1 and male to 0. We also need to convert the categories of Embarked into numerical data. We will divide the embarked column into three columns - EmbarkedC, EmbarkedQ, Embarked_S and the values will be either 1 or 0 depending upon whether the passenger were from that port or not. Note that 2 values are missing (889 values available while it should be 891), but that is okay (since it is just 2 out of 891).

Now, we’re ready to do some data exploration. Let’s start by calculating correlations between every pair of features (and the survived variable).

Correlations between features and the target variable (Click to enlarge)

Data visualization helps us see the relation between our features clearly and make better decisions. For visualization we will be importing two python packages seaborn and matplotlib.

We will visualize the correlation of features that we found above using heatmap. In heat map, we will use absolute values of the correlation, this make variables which have close to 0 correlation appear dark, and everything which is correlated (or anti-correlated) is bright. The shades of the color gives the relative strength of correlation. 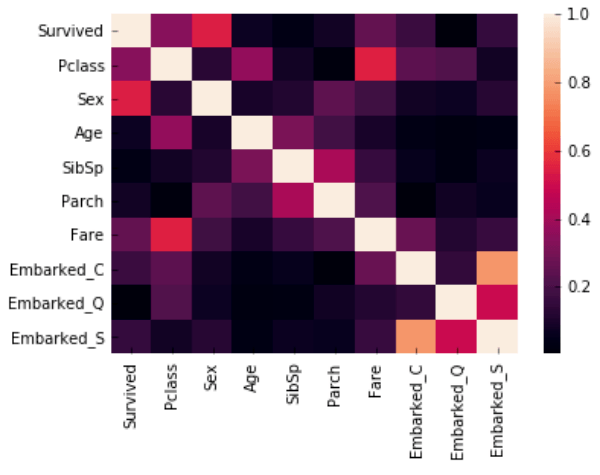 Visualization of the correlations

Observe that Pclass, Age and Fare have significant correlation (or anti-correlation) with Survived. Although, Pclass and Fare are quite correlated with each other, so they information content between the two variables might be overlapping. Also notice that Embarked_C and Embarked_S are also important variables.

Data wrangling is the process of cleaning and uniting messy and complex data-set for easy accessing and analysis. We’ve done some cleaning already.

In this section, we’ll fill in incomplete values of age. We will do that by calculating the median value found by using age values for different sex and class. As we have two sexes (1, 0) and three classes (1, 2, 3), we will have 6 combinations and we will calculate the age from each combination.

The two features SibSp and Parch both refer to family members. So we will create a new feature called FamilySize by adding SibSp and Parch. We will also add 1 as a family should have at least 1 member.

We can now see the changes we made.

Similarly, getting information from our test data, we found that Fare (417 out of 418) lacks one value.

So we will assign the mean fare (which is 32) that we can observe to the missing Fare.

We will now build models to make prediction from our data. We will be using four classification algorithms which are Logistic Regression, Support Vector Machine, K Nearest Neighbors and Random Forest.

Let’s start with logistic regression, fit it with our train features and label. Then calculate training accuracy and validation accuracy.

We will then use Support Vector Machine.

We will now use KNN algorithm.

Lastly, we will use Random Forest Classifier.

Our winner is Random Forest as it has highest validation accuracy.

As I mentioned at the very beginning, this problem is hosted as a competition in Kaggle. So we will submit our prediction to check how good we did in our test data set. We will use the predictions made from Random Forest Y_predR.

Our prediction from the above model was able to score 0.76 and was ranked in top 62%. Not bad but not satisfactory either.

From the result we can clearly conclude that our model is overfitting. Though it has 97.88% training accuracy, it only has 89.01% validation accuracy and even less test accuracy (76%). It is a clear case of overfitting as our model is very successful in making correct predictions for our training data but it fails to do so for test data.

One of the methods to prevent the model from over-fitting is to collect more data. But this is not a viable solution in our case. We can also make our model perform well and reduce the problem of over-fitting by tuning the hyper-parameters of our algorithm (Random Forest in our case). We will be using GridSearchCV method from scikitlearn to automate our process of choosing best combination of hyper-parameters.

We get following values as best parameter values from the list of values we gave.

We will now use these parameters to train our Random Forest model.

Let’s submit our prediction as we did previously.

We see that we have made improvement in our model. Our model now has 79.425 % accuracy ( shown in Fig 22). And our rank has also improved significantly. Our model is now in top 16% ( Hurrah !!) . From the test and train accuracy we can see that we have reduce the problem of over-fitting but it is not completely eliminated yet.

As we discussed above, our model still have some problems and the accuracy can still be improved. Here are some tips that might help you to improve your model (you can get started with the IPython notebook here: KaggleTitanicProject.ipynb):

We can make our model perform better by making changes to our features. Lets visualize how different features are affecting our model.

We can clearly see that Sex has the highest influence in our model. We can’t make changes in the values of Sex. But we also see that Fare and Age also have significant influence. One thing we can do to improve our model is to engineer these features. Representing the values of these features in band might improve the performance. For example, We can represent values of Age in a band like 0-5 years, 5-10 years etc.

The complete notebook with all the cells executed is available via Google Colaboratory using the link above. Google Colab is a free tool that lets you run small Machine Learning experiments through your browser. You should read this 1 min tutorial if you’re unfamiliar with Google Colaboratory. Note that, for this project, you’ll have to upload the dataset to Google Colab after saving the notebook to your drive.